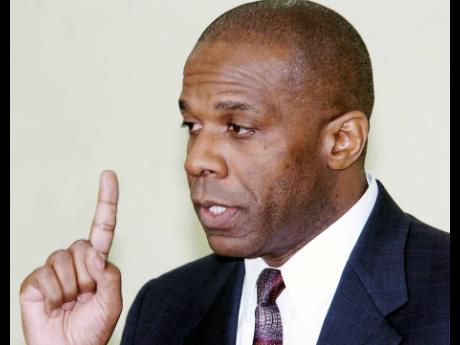 A billion-dollar catering contract approved by Cabinet is now the subject of an official complaint before the Integrity Commission.

Sunday Gleaner investigations have revealed that Elegant Weddings Event Planning & Catering Limited has reported the matter to the Greg Christie-led anti-corruption watchdog amid allegations that a key government official exerted undue influence in the contract-award process.

However, when contacted yesterday, the official in question, whom The Sunday Gleaner has decided not to identify at this time, said he had no comment to make at this stage.

In the meantime, the new food service provider, Patsy Lyn Limited, is expected to take over from the St Andrew-based Elegant, whose agreement with the South East Regional Health Authority (SERHA) ends next month. SERHA is the government authority that runs the public health facilities in St Catherine, Kingston, St Andrew and St Thomas.

Neville Lyn, who is listed as a company director for Patsy, confirmed yesterday that his Kingston-based entity was this year awarded the contract, which is yet to be signed.

“It’s a very touchy, touchy situation,” he added, while declining to explain further over the phone.

The Sunday Gleaner has obtained several documents, including a June 2, 2020 letter from Dwayne Bailey, SERHA’s senior director for public procurement, who advised the current providers that the contract would not be extended after July 2.

Two days later, Bailey wrote again to Elegant, but this time indicating that “we have concluded our tender process for dietary services” at the Kingston Public and Victoria Jubilee hospitals, and that the contract would not be extended beyond July 4, 2020.

The two letters did not include any reasons for the non-extension, and although it’s not clear when the original contract was signed, documents suggest the multimillion-dollar arrangement was extended in January 2018.

When The Sunday Gleaner contacted the owner of Elegant, she declined to speak on the matter and pleaded that her name not be included in the article out of fear for her life.

The Sunday Gleaner, however, has found that Elegant’s complaint was made to the Integrity Commission in a letter dated June 8.

It alleged that the $1.2-billion contract was not put through a competitive bidding process, that a single-source procurement method, in which the supplier is selected by the entity needing the services, was used, and that a senior government official was influential in the contract-award process.

Christie, the Integrity Commission’s executive director, to whom the letter was addressed, responded on June 15, acknowledging the complaint, and said that it had been referred to the information and complaints division for review.

Contacted Friday, Christie declined to comment, pointing to the secrecy law which blocks the commission from disclosing to taxpayers any details about investigations before a report is tabled before Parliament.

Government procurement rules dictate that contracts valued in excess of $150 million be open to local or international bidding, advertising in domestic and global media, and require approval from the head of the procuring entity before endorsement by the Public Procurement Commission (PPC) and final approval from Cabinet.

Section 25 of the public procurement law outlines that an entity may use single-source procurement under five scenarios, three of which include where the goods, works or services are available from a particular supplier, registered or not; the situation is an emergency; or in the interest of national security.

The procuring entity must also invite a proposal or price quotation from the supplier and engage in negotiations unless it is not feasible.

The Sunday Gleaner has been unable to ascertain a full justification for the approach taken by SERHA, although a source indicated that over the years, several tenders received were just “unsuitable” and there was an urgency to end the existing arrangement.

Repeated efforts to contact the chairman of SERHA, attorney-at-law Wentworth Charles, were unsuccessful.

NO BREACH OF PROCEDURES

Meanwhile, Bailey, SERHA’s head of procurement, has insisted that the procurement process was above board.

“There was no breach of any of the procedures in engaging Patsy Lyn,” he said, noting that SERHA has not received any communication from the Integrity Commission suggesting a probe is under way.

Citing legal restrictions on disclosing reasons for using single-sourcing, Bailey explained that SERHA received permission from the PPC to use that method of contracting because previous public tenders were unsuccessful.

He said bidders failed to submit required documents including a valid public health certificate. Patsy Lyn and Elegant were the only bidders on the last tender advertised over a year ago. Cabinet approval was communicated to SERHA earlier this month.

Bailey is also rejecting Elegant’s claim that it was not informed of a new tender process leading to Patsy’s selection.

“We’re not obligated to disclose to any supplier that we’re engaging a supplier,” he told The Sunday Gleaner.

“Nothing of the sort,” he said when asked if SERHA was pressured into a decision by any government official.

A very senior official in government said information on the bidding process indicated that the decision not to extend the agreement with Elegant was triggered partly by public health complaints.

On why a single-source contract, the official said “no suitable tenders were received” after at least three attempts, adding that SERHA made a “convincing” argument based on the “emergency” situation.

The official explained that although it was an “unusual approach” and “some eyebrows were raised”, given the size of the contract and the presence of dozens of caterers in the sector, the PPC endorsed SERHA’s recommendation in November 2019 and Cabinet later approved it.

“I don’t know that there are any issues there,” the official said.