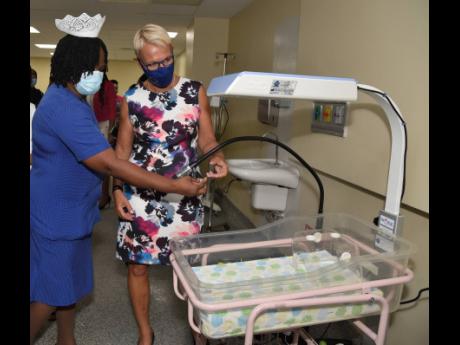 Ian Allen/Photographer
Elise Fairweather-Blackwood (left), director of nursing services at Victoria Jubilee Hospital, explains the workings of an incubator at the VJH to Malgorzata Wasilewska (right), head, European Union Delegation to Jamaica, shortly after the official opening of three high-dependency units and 16 isolation suites for premature babies on Wednesday. A 24-bed general nursery was also opened.

After seven years in gestation, a partnership forged between the Ministry of Health and Wellness and the European Union gave birth on Tuesday to the second of four high-dependency units (HDU) that were promised to reduce infant and maternal mortality rates in Jamaica.

Health Minister Dr Christopher Tufton charged the medical team to use the recent acquisition to boost the hospital’s track record.

“We have had many close misses in terms of meeting deadlines, in terms of taking full advantage of the €22 million, but I think we have been able to do right by those who had the vision, and the Jamaican people will be better for it,” he said during a handover ceremony at the hospital.

HDUs are wards that offer standards of observation, treatment, and care higher than general wards but lower than intensive-care units.

The establishment of HDUs in select public hospitals was a target of the Programme for the Reduction of Maternal and Child Mortality, which benefited from the €22-million investment in 2013.

The Jamaican Government was initially given 48 months to improve newborn and emergency obstetrics by establishing 11 HDUs in five hospitals across the island. However, coordinator for the programme, Dr Simone Spence, said a number of factors resulted in them reducing this number.

An HDU was recently opened at the St Ann’s Bay Hospital, and units will be handed over to the Bustamante Hospital for Children and the Spanish Town Hospital in the coming weeks.

The facilities will allow women with high-risk pregnancies to have access to life-saving equipment and intervention.

Head of the EU Delegation to Jamaica, Malgorzata Wasilewska, said that it was crucial to provide high-quality healthcare services.

“Health is the foundation on which all our hopes and aspirations are built, and everyone, from the poorest to the richest, from the newborn baby to the elderly, has the right to access preventive healthcare and to benefit from treatment to protect well-being and save lives,” Wasilewska said.