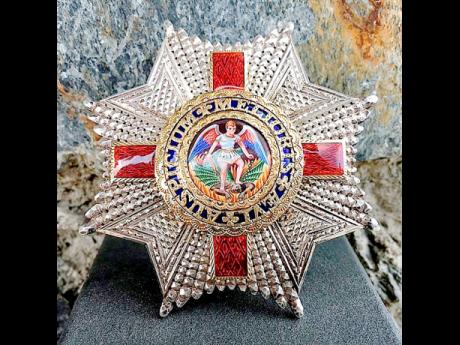 Contributed
The Order of St Michael and St George medal worn by Governor General Sir Patrick Allen has been criticised as racist. 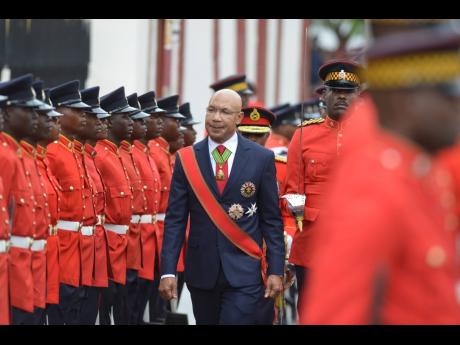 File
Governor General Sir Patrick Allen Inspects a guard of honor on Duke Street at the ceremonial opening of Parliament on February 14, 2019. One of three insignia worn by Allen has stirred outrage because of a racist depiction.
1
2

Despite news of an impending request to change a controversial racist image on an insignia worn by Sir Patrick Allen, a social-media lobbyist who stoked outrage over the depiction wants the governor general’s office disbanded altogether.

The Order of St Michael and St George medal worn by Allen shows a white angel standing on the neck of a black man representing the devil. The medal dates back to the 19th century, but criticism of the imagery’s offensiveness has gained traction amid global protests sparked by the May 25 killing of George Floyd, an African American.

Floyd died crying for his mother as a white policeman knelt on his neck for almost nine minutes.

Attorney-at-law Clyde Williams, who led the uproar on social-media platform Twitter about the racist representation of the medal, said that Jamaica should shed the relics of colonialism and complete the Independence project. A good start, he said, would be the dismantling of the office of governor general.

“I’m just glad that we are dealing with it. I think we should leave the monarchy and truly become an independent country,” said Williams.

“Not only should he stop wearing the symbols, he should get rid of the office. It’s full time!”

King’s House, the seat of the governor general, said in a statement issued on Wednesday afternoon that he understood why the image had triggered a firestorm of criticism.

“The governor general acknowledges and welcomes the concerns expressed by our citizens and the negative emotions that the image has caused and assures his fellow Jamaicans that the necessary requests will be made for a revision of the image to The Lord Chancellor of the Order of St Michael and St George,” the statement said.

The abolition of the monarchy has been the source of debate in Jamaica for decades, with the three most recent prime ministers – Portia Simpson Miller, Bruce Golding, and Andrew Holness –pledging to explore a republican model. However, there has been no discernible action in getting that movement off the ground.

The governor general is appointed by the Queen on the advice of the prime minister, but his role is primarily ceremonial.

The Floyd protests have spiralled from decrying police brutality to the removal of statues harking back to colonialism and white supremacy.

Speaking to The Gleaner two weeks ago, Professor Emerita Carolyn Cooper said that Jamaica should strip itself of all vestiges of colonialism.