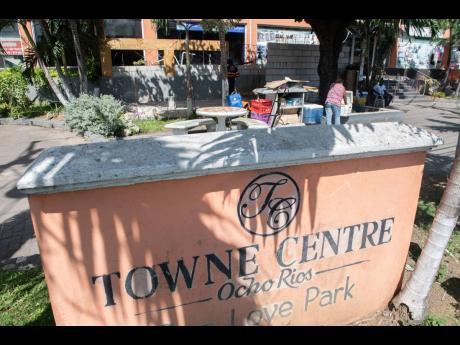 Gladstone Taylor/Multimedia Photo Editor
A construction worker on the job at the unfinished structure at One Love Park in Ocho Rios, St Ann, in the June 18 Gleaner photograph. 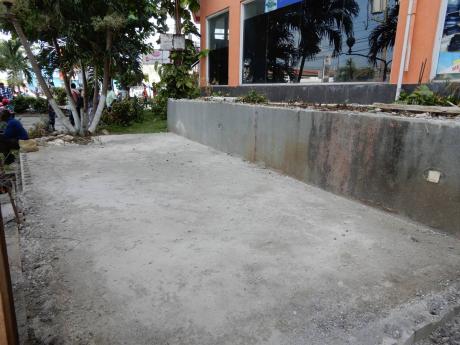 PHOTO BY CARL GILCHRIST
The structure was demolished late last week as The Sunday Gleaner pressed officials of the St Ann Municipal Corporation for answers on the breaches. 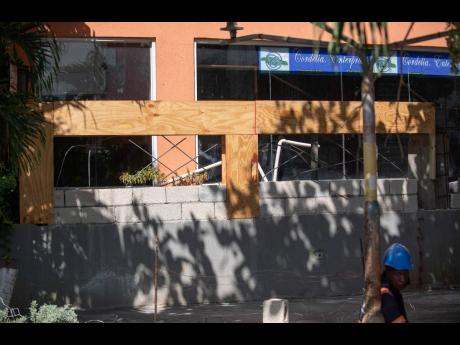 Gladstone Taylor/Multimedia Photo Editor
A close-up of the unfinished structure as seen on June 18.
1
2
3

Embattled St Ann’s Bay Mayor Michael Belnavis is a director of a private company that captured government land and constructed a building in a daring disregard of the country’s laws which the corporation he leads is expected to enforce, a Sunday Gleaner probe has unearthed.

Amid insistent Sunday Gleaner queries last week and a refusal from Belnavis and the parish authorities to answer questions, news filtered in on Friday that the unfinished structure, which stood up to Thursday evening, was gone by Friday morning.

The Sunday Gleaner investigation has also uncovered that when whispers started growing louder about the construction, the firm, City Mall Management, rushed to submit a letter requesting a “no objection” from the St Ann Municipal Corporation, which is chaired by Belnavis, the Jamaica Labour Party (JLP) councillor for the Ocho Rios division.

It is the latest in a series of questionable practices, some made public by this newspaper, bedevilling the corporation that manages the affairs of the Garden Parish and now the subject of a probe by the Integrity Commission, Jamaica’s main anti-corruption watchdog.

The Sunday Gleaner has obtained a copy of the letter signed by Michael Hill, a manager of the company who shares directorship with Belnavis, based on Companies Office of Jamaica records.

Hill, a contractor, confirmed his signature on the document dated May 12, 2020, and addressed to Rovel Morris, the chief executive officer of the St Ann Municipal Corporation.

Parish officials wrote “June 5” on the document, indicating when they received it, before referring it to the chief engineering officer and the director of planning. What happened after that remains a mystery.

City Mall asked for permission to construct a wash station for sanitary use on grounds of the public One Love Park in Ocho Rios that it was already building without the required permits. It said a site plan, which our news team has not seen, was attached to the letter.

To make its case, City Mall said the facility “will be extremely helpful” in light of the coronavirus pandemic and for use by the public when Wi-Fi is installed in the park.

But our probe suggests that a wash station was never the intention for the structure, and instead, it was supposed to house a business operation. The wash station, The Sunday Gleaner understands, proved a convenient excuse as questions about the work bubbled to the surface.

‘I ONLY SIGNED IT’

Construction also reportedly started at least a month before the letter was submitted for approval. This has since been confirmed by Hill, who sought to distance himself from the contents of the letter, claiming he only signed what was presented to him.

“Bwoy, me nuh know,” he said when asked why permission was not sought before work started. “Mi haffi guh find that out. Me only sign it because something was going on.”

Asked to confirm his role as manager, Hill said: “So dem seh, but me nuh manage it. Dem do everything dem want. I signed some letter because dem seh dem doing this thing down there.”

Hill did not elaborate on what he meant and to whom he was referring to as ‘dem’. Telephone calls to him since have gone answered.

Emails, telephone calls and phone messages to Belnavis and his office have all gone unanswered. Questions to the CEO on actions taken after the letter was received have also not been answered.

On Friday afternoon, hours after news came of the demolition of the structure, leaving its concrete floor, the local government ministry, to which municipalities report, responded to questions sent last Wednesday, saying investigations “are being undertaken”.

A Sunday Gleaner team visited the park on June 18, where the unfinished structure was seen on the property, which adjoins the Towne Centre Plaza, a 10-year-old commercial complex owned by Mayor Belnavis.

Under the Building Act, a permit is required before any construction can be done in a parish, and approval could take up to 90 days. The law also allows for emergency construction without notice, but before the end of 24 hours, such a notice must be submitted to the parish authorities. There are a lot of other processes to lease or buy government land.

Building without a permit could result in a stop notice for the immediate cessation of works until a plan is submitted and approved. Conviction in the courts could see a fine of up to 10 per cent of the estimated cost of the construction, or up to four years in prison.

A senior administration official in St Ann, who was not authorised to speak to media, said the corporation needs an “overhaul” and has placed some blame on McKenzie’s ministry.

“This place needs a shake-up. We can’t continue like this. It’s not like people do not know what is going on. They just refuse to act. I’m just sorry for the CEO,” the official said.

Neville Williams, a one-term former JLP councillor for Ocho Rios, has questioned why the company had not followed the letter of the law.

“I am concerned about the kind of leadership that Belnavis brings to the table,” he said.

But it’s not the first time that the St Ann authorities have had issues with entities associated with Belnavis and building codes.

In December 2008, the then known St Ann Parish Council took D&M Enterprise Limited to court and obtained orders forcing compliance with the law in relation to the park and the complex now called the Towne Centre Plaza, whose entrance is through the park. Belnavis was a defendant in the matter.

Court documents show that Belnavis was ordered to demolish a guard house, concrete columns erected in the park, and replace lamps removed from the park, among other things.

The municipal authority has not answered questions on whether the orders were fully complied with.

Meanwhile, Belnavis and other officials of the St Ann Municipal Corporation were last week grilled by Integrity Commission investigators, The Sunday Gleaner understands.

The Integrity Commission raided the municipal corporation on June 12, seizing documents and equipment, including phones, after questions were raised about a $47-million non-competitive contract for sanitation of Ocho Rios, and the use of taxpayers’ money to buy and install an $80,000 electric charger for the mayor’s personal $12-million Porsche motor car.

The opposition People’s National Party called for Belnavis to be impeached by the corporation in which the ruling party controls 11 of the 16 divisions.