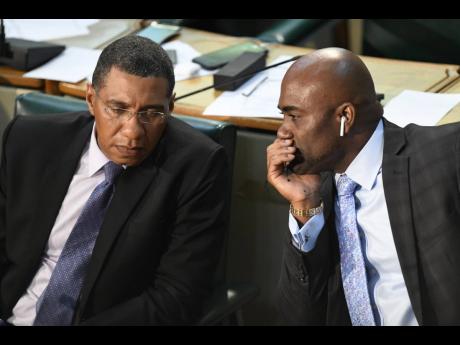 File
Prime Minister Andrew Holness (left) listens keenly to then Energy Minister Andrew Wheatley at a sitting of the House of Representatives on Thursday, March 15, 2018. Wheatley later stepped down amid an unfolding Petrojam scandal.

Prime Minister Andrew Holness is facing a tough decision on whether to name a key loyalist, the scandal-scarred Dr Andrew Wheatley, among his ruling party’s slate of prospective candidates in the next general election.

The embattled former energy minister, believed to be a confidant of the Jamaica Labour Party (JLP) leader, has been referred to the director of corruption prosecutions in a damning report released on Tuesday.

The director of investigation was caustic in his characterisation of Wheatley’s response to specific questions during a probe into donations made by Petrojam to various organisations and causes between April 2016 and March 2018.

According to the report, the former minister “was dishonest in his representations concerning Ms Sophia Deer and whether he sought to mislead and did mislead the director of investigation.”

The pieces of legislation cited that Wheatley may have breached include Section 48(3) of the Integrity Commission Act, Section 11E of the Commission of Enquiry Act, and Section 4 of the Perjury Act.

Section 11E of the Commission of Enquiry Act states that a person shall not give evidence before the commission that he knows is false or misleading. The fine on conviction for committing this offence does not exceed $1 million or imprisonment for a period not exceeding six months.

Wheatley is considered to be a close ally of the prime minister, and this latest development will place the JLP leader on the back foot as he and the top brass of the party fine-tune their plans and prospective candidates for upcoming national polls constitutionally due by 2021.

The Integrity Commission scolded Wheatley in a scathing report tabled in Parliament on Tuesday, saying that the statement provided by him to the director of investigation, in relation to Wheatley’s relationship and/or affiliation with Sophia Deer, is disingenuous.

“Dr Wheatley was less than truthful in his representations to the director of investigation when he described Ms Sophia Deer as his former technical assistant. Ms Deer has been revealed to be the mother of Dr Wheatley’s nephew,” the report stated.

Deer is the principal of Homestead Primary School, which is located in the St Catherine South Central constituency in which Wheatley is the member of parliament. She also sat on several boards within the Ministry of Science, Energy and Technology when Wheatley was minister.

However, the director of investigation found no instances of nepotism and/or improprieties in the actions of Dr Wheatley and his relationship with Ms Deer in the context of this investigation.

On Monday, Holness reserved comment in the face of questions about St Ann’s Bay Mayor Michael Belnavis, who has been embroiled in controversy over his stewardship of municipal funds, which climaxed last Thursday with a demolition related to building breaches.

“... Once I am satisfied that there is something there that requires action, then you would know by my past track record that I do act on these matters,” Holness said in response to a question from The Gleaner.

In March 2019, another close ally of Holness’s had to resign as education minister in the wake of the Caribbean Maritime University scandal. Ruel Reid, his wife Sharen, and their daughter Sharelle, along with Professor Fritz Pinnock and Brown’s Town division Councillor Kim Brown-Lawrence, are facing fraud-related charges in relation to the university.

But the Petrojam scandal that rocked the Holness administration in 2018 appears far from ending, as the Integrity Commission submits aspects of its findings to other law-enforcement bodies for further investigations.

The commission recommended that a copy of its report detailing allegations and findings concerning the repurposing of the donation of funds from the McCooks Pen Citizens’ Association to the Sydenham Citizens’ Association, and the allegations of fraud relating to signatures purported to be that of one Charmaine White, be referred to the commissioner of police for the conduct of criminal investigations.

The commission further recommended that a handwriting expert be engaged to examine the authenticity of signatures purported to be Charmaine White’s.

Petrojam first donated J$9,000,381.50 to the McCooks Pen Community Centre. However, Floyd Grindley, the former general manager of Petrojam, asked the board of directors that the funds be redirected for the renovation of the community centre as requested by the Sydenham Citizens’ Association.

Further, the director of investigation recommends that the report be referred to the Financial Investigations Division for a further probe to be conducted in relation to donations made by Petrojam Limited for the period 2016 to 2018 to the Sydenham Citizens’ Association, Homestead Primary, Camperdown High, the University Diabetes Outreach Programme, and the North Eastern Regional Health Authority.

Camperdown High School received a donation of J$6 million to upgrade its sporting facility to a mini -stadium.

The request to Petrojam Limited for the donation to the school came from Paulwell.

According to the report, Paulwell advised the director of investigation that the letter he wrote “... was done on the advice of the then minister with responsibility for Petrojam Limited, Dr Andrew Wheatley”.

Valentine Bailey, principal of Camperdown High, told the director of investigation that no construction was undertaken to upgrade its sporting facility as the donation was not enough to commence the work.

Paulwell informed the director of investigation that only a portion of the donation to the school was expended to date and that the balance was held on an interest-bearing account at the National Commercial Bank (NCB).

The amount reportedly spent was $1.76 million for the provision of surveying and architectural services.

The director of investigation said that he was not provided with any official banking records by Paulwell or Bailey to confirm the balance held on an interest-bearing account at NCB.