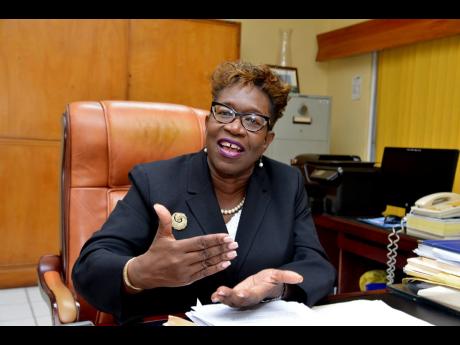 The position of the People’s National Party (PNP) president is against that of the Andrew Holness administration, creating a major political division over an important constitutional office.

The DPP is responsible for criminal prosecutions on behalf of the Government and under Section 96 of the Constitution, an office holder’s tenure ends on reaching the age of 60, which Llewellyn will be in September.

The section further states that an extension may be granted before the DPP turns 60 by the governor general acting on the recommendation of the prime minister after consultation with the leader of the Opposition.

The extension cannot exceed five years and it’s not clear for how long the DPP has requested to stay on for.

Repeated attempts yesterday to get confirmation from the Opposition leader were unsuccessful. Officials at his office said he was in regular Monday meetings.

However, The Gleaner has obtained a copy of Phillips’ May 21 submission to Sir Patrick. Phillips told Queen Elizabeth’s representative here of his March 2 response to Holness’ proposal to support the extension.

“I have the most strenuous objection,” Phillips said. The letter to the GG, The Gleaner understands, is part of ongoing discussions involving the decision-makers in the matter.

Phillips argued that his view was based on a range of issues including what he termed the “many deficiencies” in the conduct of the Office of the DPP during Llewellyn’s 12-year tenure.

“Jamaica’s reputation as a jurisdiction rife with corruption has grown in this period and it is troubling that in such an environment, the Office of the DPP, from all objective accounts, has a poor track record in the prosecution of corruption cases,” he said, pointing to a more comprehensive response he gave Holness.

The Gleaner has not seen the letter to the prime minister.

To bolster his claim, Phillips pointed to criticisms from local and international organisations, including the Organization of American States (OAS) Mechanism for the Implementation of the Inter-American Convention against Corruption, and the former Office of the Contractor General.

In a 2014 report, the OAS said the authorities needed to take steps to address what it said was the lack of prosecutions being carried out by Llewellyn’s office for corruption and corruption-related offences.

The report had noted concerns among local officials that hardly any Jamaican politician or public official has been arrested or prosecuted for corruption despite the high levels of the crime in Jamaica.

However, Llewellyn questioned research methods of the OAS review, noting that her office was never involved in the review.

She had also stressed that the DPP’s office was not an investigative body and clerks of court who report to the chief justice were responsible for the prosecution of most corruption cases.

But in his King’s House missive, Phillips argued that given Llewellyn’s “extraordinarily long” tenure, and the deficiencies he claimed, “the public interest would be best served with an open, transparent process of recruitment to this very important office of a person who enjoys unquestionable public confidence”.

The opposition leader also argued that extending the DPP’s tenure does not reflect ‘modern thinking’ which he says favours seven-year tenure for appointment of public officials.

“This thinking always facilitates differentiation between the tenure of the Office of the DPP and the five-year maximum term of any political administration without making it so long as to create a diminished sense of accountability on the part of the office holder.”

A government official yesterday said they could not say, with any certainly, if anything has been approved. “I just don’t know.”

Llewellyn, the first woman to hold the office of DPP, said “I decline all comment in this matter.”

In one of the most high-profile corruption cases of the last decade prosecuted by Llewellyn, PNP MP Kern Spencer walked free from allegations of money laundering and illicit enrichment in the Cuban Light Bulb affair after a judge upheld a no-case submission from defence lawyers.

In another major case that’s still ongoing, some senior members of the Opposition PNP have been fighting the state prosecutor’s office to avoid answering questions in open court from Dutch investigators probing the $31-million donation to the PNP administration in 2006 by Dutch firm Trafigura Beheer.

Llewellyn has consistently complained of the limited resources her office was being given which she has argued has impacted on the extent of her work.

In 2017, the office won a major breakthrough when the finance ministry approved the hiring of 17 additional employees – 10 prosecutors and seven administrative and paralegal staff.

Corruption issues have afflicted both political parties in recent weeks with scrutiny intensified over operations at the St Ann Municipal Corporation, damning reports of corruption at Petrojam under the Holness administration and Lisa Hanna’s role in awarding contracts to alleged PNP cronies in her constituency.