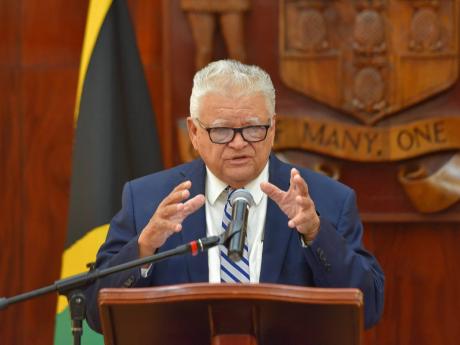 The Integrity Commission Oversight Committee (ICOC) of Parliament could be on a collision course with Integrity Commission Chairman retired Justice Seymour Panton for statements the latter made in the body’s second annual report, chiding parliamentarians for being a vehicle for “philanthropy”.

“There should be no question of giving money to a parliamentarian to distribute to constituents,” Panton stated in the report, arguing that “parliamentarians are not supposed to be engaged in the distribution of gifts, scarce resources or spoils”.

The scorching criticism did not go unnoticed by some members of the committee, who commented on the issue yesterday during the inaugural sitting of the ICOC.

Committee Chairman Karl Samuda urged his colleague lawmakers to take note of Panton’s remarks in the annual report, noting that “it is a statement worth reading”.

“Philanthropy and how it should be treated, he makes specific reference to the treatment of that,” Samuda said.

Following an inaudible comment from another member of the committee on the PBC Jamaica feed, Samuda replied: “Why are you being contentious? I am simply referring a document to you. Read it and we can comment on it when we come to dealing with it ... because, like you, I am not sure where the authority is vested.”

In the Integrity Commission’s annual report, Panton emphasised that philanthropists should distribute donations to Jamaicans themselves or use the service of established charitable bodies such as the Salvation Army.

Nearly two months ago, members of parliament on both sides of the political divide lauded a $31.5-million donation from Sandals hotel mogul Gordon ‘Butch’ Stewart to distribute to their constituents in light of the COVID-19 pandemic.

At yesterday’s ICOC sitting, Everald Warmington charged that members of the anti-corruption agency should submit their statutory declarations to an independent body for review.

He cautioned that if the Integrity Commission had been reviewing the statutory declarations of its directors, commissioners and staff, it could constitute a conflict of interest.

“They can’t declare to themselves. Therefore, a mechanism has to be established that the directors and the employees and all make declarations as required under the law,” Warmington said.

He argued that the auditor general was a member of the Integrity Commission, and as such, she would be excluded from reviewing the statutory declarations of the oversight body.

However, Samuda suggested that the Integrity Commission should be able to receive the submissions from persons who work for the anti-corruption agency.

“This committee, which is an oversight committee, has to establish a mechanism whereby declarations are made by all and sundry inside there,” Warmington insisted.

Attorney General Marlene Malahoo Forte queried how the statutory declarations of members of the commission and the staff are dealt with by the Integrity Commission. She also enquired whether there were “issues of conflict, perceived or real”.

Malahoo Forte indicated that the oversight committee should get the views of members of the commission on what should be in place to satisfy the concerns raised by Warmington.