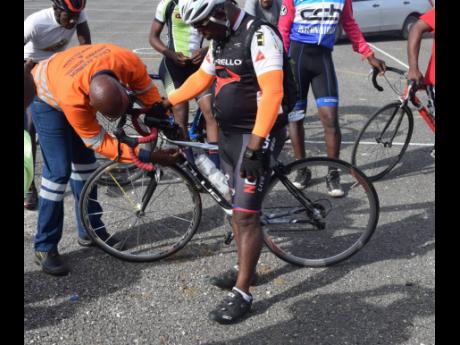 Photo by Cecelia Campbell-Livingston
Clinton O’Connor, CEMEX/Carib Cement Driving School instructor, demonstrates how to conduct a safety check on a bicycle to members of the Clarendon Cycling Club before they headed out on a ride to Montego Bay. 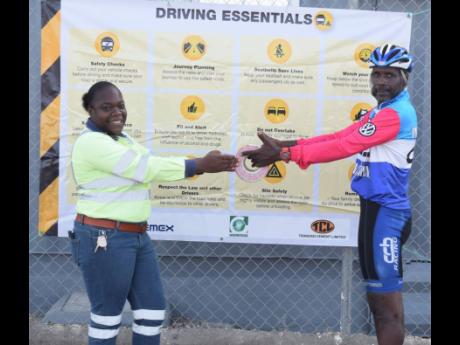 Deon Palmer, president of the Clarendon Cycling Club, has expressed concern about the number of accidents involving bicycles in the parish, saying many of these incidents go unreported.

“Bicycle accidents are more regular than you think,” Palmer said at a recent ceremony to accept a donation of reflector strips under the CEMEX Global Supply Chain Vulnerable Road Users initiative, a partnership between CEMEX Jamaica and Caribbean Cement Company Limited.

“Just this week, one friend of mine was hit off his bicycle by a minibus driver, who admitted he fell asleep,” Palmer added.

He said that most cyclists make arrangements on the spot for compensation with motorists, if their bicycles are not badly damaged or they have not suffered serious injuries.

He added that, as such, police data would not capture a full picture, especially since most accidents go unrecorded if the cyclist survives the incident.

“There are more accidents in Clarendon involving cyclists than is being reported,” Palmer insisted.

“Motorists need to be more aware and to respect all road users. Some drivers behave as if cyclists do not have a right to be on the road. Many riders get knocked off their bicycles daily, but do not report it. Drivers need to take bicycle riders and the risks we face seriously,” Palmer said.

The cycling club president expressed gratitude for the donation of reflector strips, which will be distributed to pedal cyclists who club members encounter without the safety device on their bicycles.

“With a gift like the reflector strip, that is important, but the highlighting of the safety measures is an even more important gift,” said Palmer as he thanked the CEMEX team for a pep talk given with the club members just before a recent 192-kilometre ride from the parish of Clarendon to Montego Bay, St James.

CEMEX/Carib Cement’s Driving School instructor Clinton O’Connor engaged the cyclists in a discussion, giving them guidance on personal protective equipment, including foot straps, helmets, and clothing. He also briefed them on the correct placement for reflector strips; how to detect blind spots of a truck; how to be mindful of other road users, including pedestrians; and on adherence to the road code and safe riding practices.

Palmer said that many persons believe the club, which was founded in 1980, concentrated on cycle races, but it is open to every person who rides a bicycle, if even just for recreation.

He said the club is now executing a programme for children with a recreational ride group to boost their fitness.