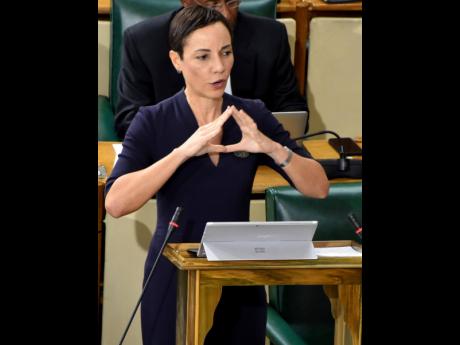 A report from a joint select committee that deliberated on the Sexual Offences Act and related statutes was yesterday approved by the Upper House, setting the stage for husbands to be criminally charged for raping their wives, a move bound to provoke some religious conservatives who insist marriage gives unconditional consent in sexual affairs.

Kamina Johnson Smith, leader of government business in the Senate, yesterday led the debate on the report which was later approved by lawmakers.

The joint select committee had reviewed the Sexual Offences, the Domestic Violence, the Offences Against the Person and the Child Care and Protection Acts.

“Married women who are raped by their husbands will no longer have to fulfil certain conditions to qualify for legislative protection. The committee recommended that once a woman has withheld her consent in a relationship, irrespective of whether it appears in marriage or not, it is to be considered rape,” Johnson Smith told the Senate yesterday.

“It was recognised that rape is an act of violence and marriage is an institution which must be fostered in a context of love and mutual respect – not violence,” she added.

The committee, looking at rape and other sexual offences, has recommended that convicts of these offences, though committed overseas, be added to a Jamaican database as a requirement upon landing in the island.

“The Sexual Offences Act has been recommended to place an obligation on persons who have relocated or being returned to Jamaica and have been convicted of a sexual offence abroad or have been listed in a sex offender’s register abroad to report to the authorities and as such they should be listed on the sex offender’s registry in Jamaica,” she said.

Constitutional lawyer Dr Lloyd Barnett, weighing on the development in the Senate, told The Gleaner that the mere registration of a person would not likely cause any constitutional issue.

“Merely registering the person, I don’t think would be a problem. The question is what follows after that. If you are restricting their movement, then you get other questions. And if you are going to make it available to persons who should not get it, then that would be a problem.

“The Government would have access to what the person would have been in prison for. You don’t need that person to tell you that, it is matter of public record,” Barnett said.

The Senate leader said there was a recognition of operational weakness in the current sex offender’s registry and recommended that the Ministry of National Security audit the administration and operation of the registry.

Having been approved yesterday, the report will now form the basis for legislators to make changes to the various pieces of statute.