‘What really happened in that room?’ - Johnson-Sinclair’s widower wants answers from hospital about death of his spouse 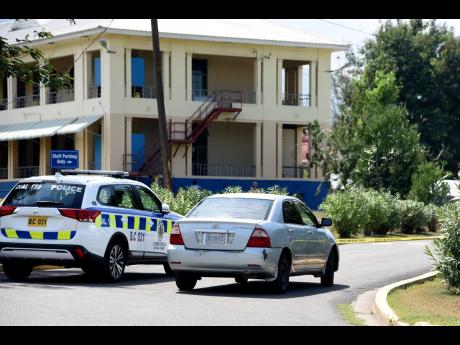 Kenyon Hemans
A section of the National Chest Hospital was cordoned off on Wednesday as the police investigate the controversial circumstances under which Carsha Johnson-Sinclair, who was a patient at the facility, died.

David Sinclair, the widower of Carsha Johnson-Sinclair who died under questionable circumstances at the National Chest Hospital in Kingston on Wednesday, is pressing the hospital to provide information on what led to the death of his wife.

The family, which has retained the services of attorney-at-law Isat Buchanan, is concerned about the circumstances surrounding her untimely death.

“What I want to know is what really happened in that room where my wife was. Them telling me she may have committed suicide to get out of isolation at the hospital, that don’t cut it for me,” said Sinclair.

It was reported that Johnson-Sinclair fell into a vent.

Her widower told The Gleaner yesterday that the hospital is yet to provide full details about the circumstances surrounding the death of his spouse.

He said that his wife would need to stand on something to gain access to the opening of the vent; otherwise, it would have been impossible to get inside it.

“She cannot live without oxygen; even to go the bathroom could spell danger if she’s off the oxygen. If she walked off without the oxygen she would just collapse. It was that bad with her,” a grieving Sinclair explained.

Johnson-Sinclair was diagnosed with rheumatoid arthritis 13 years ago. The disease is an autoimmune condition, whereby the immune system mistakenly attacks healthy body tissue.

Sinclair said in 2017 his wife was diagnosed with chronic obstructive pulmonary disease, a common lung disease that makes it hard for a person to breathe.

He said that Johnson-Sinclair, 43, was a regular patient at the National Chest Hospital and was admitted twice before.

“I heard from her on Monday and Tuesday, only to hear on Wednesday from news reports that my wife jumped through the chute to escape. Something is not right with that to me,” said Sinclair.

The couple has two girls and was married for 21 years before her untimely passing.

“All I am asking the hospital is to prove the story to me. That is the least they can do right now. The story they giving me that my wife was trying to escape that area she was in do not sit right.

“They know everything and I am demanding answers. Where was the nurse who was to be monitoring my wife and what did she do and who was called to assist,” he questioned.

Buchanan is concerned about the circumstances surrounding her untimely death.

“Carsha was not a COVID-19 patient as she in fact had tested negative for the virus. She was admitted to hospital and placed in isolation to prevent infections while being treated for a pre-existing medical condition,” said Buchanan in a statement on behalf of the family.

Buchanan said that the family felt compelled to refute the statement reported through the media that she may have committed suicide. They are calling for a thorough investigation and a coroner’s inquest to ascertain the true circumstances surrounding her death.

“We ask that the family not be targeted and discriminated against because of any misinformation that might have led the public to believe that members of the family were exposed to COVID-19, as this is not the case.

Health & Wellness Minister Dr Christopher Tufton said the ministry was made aware of the unfortunate incident and that a probe is to be launched to determine the facts into how Johnson-Sinclair died at the National Chest Hospital.