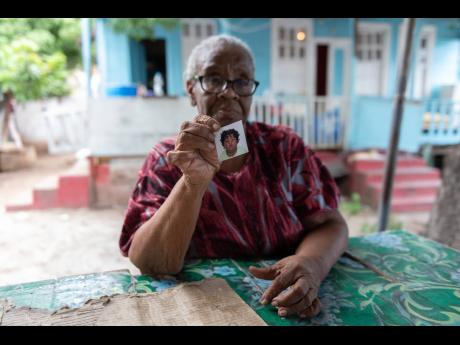 Gladstone Taylor
Odane Abbot’s grandmother, Dorothy Fay-Brown, 71, could not hold back the tears as she recounted how she watched from her verandah as thugs burst into her yard on Lincoln Crescent, in the south St Andrew community of Arnett Gardens, killing her grandson in 2016. Here, she shows a photo of Abbot’s daughter, three-year-old Chelsea, who he never got to meet because he died before she was born.

Its first known murder in Jamaica was committed nine years ago.

The last time the Jamaican police found evidence of its use was four years ago through spent shells found at the scene of a double murder in Portland.

The two men killed in that incident are victims number six and seven of this killing machine, according to police investigators citing the result of ballistics tests.

The seven murders linked to this mystery weapon are spread across five police divisions. The victims include a Portland native who had migrated to The Netherlands in search of a better life, and a Jamaica College (JC) past student who had vowed to take care of his grandmother so that she could enjoy her golden years.

Apart from clues suggesting that it is a 9mm pistol, police investigators conceded that very little is known about the make and model of this killing machine, how it entered the island or the murderers who have possession of it.

“It would be like one of those guns you’d call a ghost. It pops up at crime scenes and then it disappears,” a senior investigator who requested anonymity because he was not authorised to speak about the case told The Sunday Gleaner.

“And it is still out there. It has not been located.”

The killings by this ‘ghost gun’ have been linked through forensic analysis of spent shells found at the scene of each incident, the investigator disclosed.

According to law-enforcement sources, this supposed 9mm pistol is among more than two dozen ‘ghost guns’ being tracked by the Jamaica Constabulary Force (JCF), because each has been linked to multiple murders across the island.

National Security Minister Dr Horace Chang said it was “difficult to determine” the number of ‘ghost guns’ being tracked by the JCF, but insisted that his priority is getting them off the streets.

“The statistics on that I wouldn’t seek because it doesn’t carry a lot of weight. What carries weight is the gun and how many people it kills. So, you know that particular gun, so you need to find it,” Chang told The Sunday Gleaner.

Over the last decade, Jamaica has recorded over 11,000 murders, 75 per cent of which involved the use of illegal guns that continue to pour into the island.

This particular mystery weapon was first found to be involved in the shooting death of Jermaine Mattis in the east Kingston community of Vineyard Town on November 10, 2011.

After a non-fatal shooting in Kingston in February 2014, the gun was used repeatedly in 2016 to unleash terror on several families in Kingston, St Andrew, St Mary, and Portland, investigators revealed.

Oral Smelly was the first victim that year. He was reportedly gunned down along Arnold Road, in central Kingston, on May 13.

Twenty-five days later, spent shells from the 9mm pistol turned up in Gayle, St Mary, at the scene where Robert Riley was shot dead on June 7.

But the most gruesome incident came a little over two months later when three friends – Kenardo Hutchinson, Odane Abbot, 21, and Morais Harris, 35 – were sprayed with bullets during a brazen daylight attack by thugs on August 16.

Abbot’s grandmother, Dorothy Fay-Brown, 71, could not hold back the tears as she recounted last Thursday how she watched from her verandah as the thugs burst into her yard on Lincoln Crescent, in the south St Andrew community of Arnett Gardens.

She said Abbot, a past student of JC, had just handed her a bottle of water and was about to return to the game he was playing “when me hear the gate kick”.

“And me hear Blow! Blow!” said the elderly woman, tears welling up in her eyes as she imitated the sound of the gunfire.

After the thugs made their escape, Fay-Brown said she got up from her verandah and went to check on Hutchinson and Harris, unaware that her grandson was mortally wounded nearby.

There has been no word from the police, she said, about a suspect or motive for the attack on her grandson who had vowed to take care of her.

“Him say ‘mi granny, a you send me go JC, you a me mother and now me get the work weh me can help you. Me a go buy you medication, me a go throw you partner fi you and give you a likkle money in a you pocket’,” she shared of her beloved.

Asan Anderson, 43, who resided in The Netherlands, returned to his native Portland in September 2016 for a short visit when investigators believe he, too, became a victim of the ghost 9mm pistol.

Anderson and other family members had reportedly just returned from a wake when he was shot to death by thugs who barged into his home in Drapers Heights. As they fled the house, the gunmen reportedly executed Leroy McKoy, 48, who was asleep in his car that was parked outside the gate.

Four years later, Anderson’s brother, Leroy, who was inside the house the night Anderson was killed, is still searching for answers. “Me nuh know how fi feel. Me in a one trance weh me nuh understand, me just haffi say life goes on,” he said.

The Portland double murder was the last time spent shells from the ‘ghost gun’ have been retrieved at a crime scene, but investigators insist that they have not given up on their search to locate it.

For some investigators, ghost guns are troubling telltale signs of increasing alliances being formed in the criminal underworld, even among gangsters who were blood enemies in the past. In most cases, it is believed that these bonds are formed in prison or based on the sharing of spoils from their nefarious activities.

“There are some guns that are affiliated with certain individuals or certain gangs, and depending on who get the contract fi go mash a work, you will find the gun being used in different locations,” said one crime-fighter, using the street slang for contract killings and robberies.

Another explanation, according to the minister of national security, is that “there are professional hitmen in Jamaica today. They will use the same firearms, sometimes they use other firearms. That’s the sad reality of life.”

The United States (US), long criticised for not doing enough to stem the flow of guns coming into Jamaica, has announced a new initiative that is aimed at identifying gunrunners behind the shipment of weapons to the island.

US Ambassador Donald Tapia disclosed that as part of the measure, the Jamaican police are required to turn over to their American counterparts the serial number or other information about firearms taken from the streets of Jamaica.

“We now can track that back to the US, to find out who bought the gun, was it transferred to somebody or was it stolen. Not only that, we might see that the same person is buying it for gunrunning,” the ambassador said during a discussion forum with this newspaper last month.

Jamaica has recorded 704 homicides and nearly 650 shootings since the start of the year, figures that are marginally lower when compared with the corresponding period last year.

Teri Nichols, the widow of one of two American missionaries brutally murdered in St Mary four years ago, believes the absence of any deterrence and a lack of confidence in the judicial system are at the heart of Jamaica’s crime problem.

Harold Nichols, 53, and Randy Hentzel, 48, were shot and chopped to death in a horrific killing that made international headlines.

“A lack of confidence in the constabulary force means there is no community trust in the laws that are supposed to protect the citizens,” Teri told The Sunday Gleaner last week.

“I still can’t wrap my brain around a foreign citizen being murdered in cold blood and nothing is done about it. I can’t imagine the pain Jamaicans feel over losing loved ones to violence and then, to make it worse, have no hope for justice.”

Despite the national decline in murders and shootings, several police divisions, including St Andrew North and St Ann, have seen an uptick in both categories.

Conversely, traditional hotspots like St Andrew South, St James and Clarendon have seen a fall-off in homicides and shootings, due largely to the states of emergency imposed by the Government.