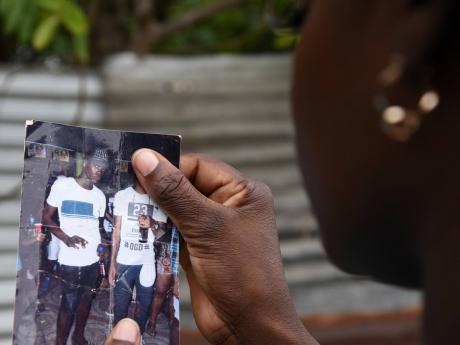 Ian Allen
A mother looks at a photo of her son who was shot and killed in Steer Town, St Ann recently.

As corruption investigations deepen into operations at the St Ann Municipal Corporation, life for residents of Parry and Steer towns, in particular, has been a frenzy of fear, gunshots and bloodshed as warring gangsters push the parish’s gun crimes to more than 100 per cent of what they were last year.

According to stakeholders, the parish, which is heavily dependent on tourism, could be in for a much lengthier COVID-19 recovery if criminal gangs, particularly the ‘Young Paper Chasers/Hot Head’ and ‘Duss’ gangs, are not brought under control in short order. These are reportedly the most active and deadly of a string of warring factions police in the Garden Parish have been hunting.

According to police statistics up to late last month, St Ann has seen the greatest increase in murders and shootings since the start of the year – with at least 37 murders, up from 19 last year; and 26 shooting incidents, compared to 13 for the corresponding period in 2019.

There have also been five cases of rape in the parish so far, two more than last year, as the cops report minimal reductions in robberies and larceny. The figures also show St Ann accounting for 136 of 2,431 major crimes reported across all divisions this year.

Both gangs, according to police sources, have accounted for a chunk of the gun crimes, some spilling out beyond their primary stamping grounds in Steer Town into other communities not far from the tourist attractions in Ocho Rios.

Cousins, 20-year-old Alex Williams and 18-year-old Garfield Cunningham, were among the latest victims of the gang feud. Both were peppered with bullets at their uncle’s house in Steer Town in April, setting the stage for a string of shootings since.

“The criminals were going after one of the ‘Duss’ man dem. The two youths are basically casualty,” said a police source of Williams and Cunningham, who were reportedly only visitors to the ill-fated house.

The police have since charged a 25-year-old man from Steer Town for the double murder, but even as that case continues before the courts, William’s mother, Colletta, battles poverty and the grief of losing her only son. Now she must watch her own head, she said.

“It has been very hard for me, and even when we had the grave-digging it was very mournful, very sad,” stated the despondent mother during a Sunday Gleaner visit to the community last week. “I was scared living here before but since this happened it has been even worse for me.”

Like many victims of inner-city violence, the mother was mum on possible motives for the shootings in her community but insisted that her son was never involved.

“I’m telling the truth. He worked all ‘bout, him do chef work, him do construction, used to work at a hardware in Salem. It was his uncle’s house and dem nuh inna nothing bad, so that’s why dem did go around there.”

These tit-for-tat reprisal slayings seem to be the main catalyst for the rivalries, and Genevor Gordon-Bailey, councillor for the Lime Hall division, which encompasses Steer Town, said the continued violence is disheartening and disastrous to work done in the area over the years.

“It is so sad based upon the millions of dollars of interventions that have been put into Steer Town. I myself as a councillor have tried to reach out. I can’t say if this one is a gunman or if that one is not a gunman because I really don’t know. But it is really sad what is happening with the youths in the community,” said Gordon-Bailey.

“I know that the police are really working with good information but what is happening is that when anything happens and the police do the operation, they don’t have any witnesses coming forward.”

She added that in addition to COVID-19 restrictions, night-time business operators are also contending with increased shootings after dark.

In Parry Town, where two men – Shanardo Gaynor, 21, and Omar Beckford, 29 – were shot and killed at a playing field during the Easter holidays, residents at a local bar also remained mum to inquiries from members of this news team. So, too, were persons on a nearby corner close to where another youth was gunned down recently.

Via telephone, however, one resident of that community blamed the influx of “strange faces” and normalisation of criminality for the ongoing violence, even with regular police and military presence in the area.

“If you look around, there is a lot of strange faces, and people have started to take this thing (crime) for the norm. That is why I think this community will never come back. People just sit down and if they hear a gunshot they just sit down, they don’t bother to even call the police,” said the female.

“These things are just becoming a part of the culture of the community. Right now the only thing left is to just take my son and get out because I don’t want him growing up in that community. Every day is a new face and these persons, although they say you are not to judge, look very questionable.”