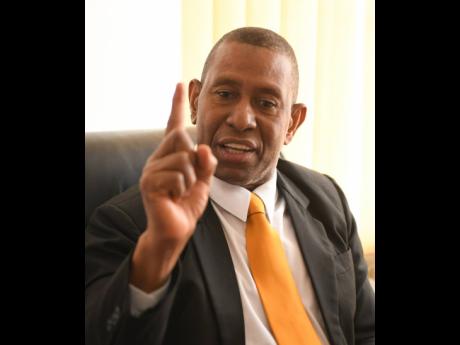 Four men who had a murder charge hanging over their heads for more than a decade before being acquitted are seeking compensation for the pain and suffering they went through as they waited to gain their freedom.

The men – 37-year-old Damion Crosdale, 41-year-old Kimarley Cooper, 42-year-old Carlos Howard, and Leslie Nugent – say their lives will never be normal as they have daily flashbacks of the ordeal and now have difficulty finding jobs.

They were arrested and charged in 2002 and languished in custody for five years before they were granted bail.

They were set free after the so-called eyewitness admitted to a prosecutor on the day of the trial in June 2018 that she did not witness the shooting incident of 16-year-old Delroy Lawrence at York Street, Franklin Town, east Kingston, in December 2001.

Last week, each of the men filed a claim in the Supreme Court seeking damages for false arrest, malicious prosecution, loss of income, aggravated damages, and exemplary damages.

They are claiming that the case was not properly investigated, it was prosecuted without reasonable and probable cause, and they were prosecuted on woefully contrived charges for the offence of murder.

The claim also outlines numerous beatings and injuries the men said they received at the hands of the police and correctional officers.

“These cases represent one of the darkest sides of the administration of justice,” stated attorney-at-law Hugh Wildman, who is representing the men

“It was inconceivable that these men could be incarcerated for so long on the discredited evidence of a purported eyewitness. When based on the forensic evidence, it was manifestly clear that the witness did not see what she purported to have seen.”

Queen’s Counsel Valerie Neita Robertson was instrumental in the release of the men, giving free legal service when she became aware of the men’s plight.

She said that eight years after the murder, the relative who identified the body stated that the alleged eyewitness was not being truthful.

“The relative, who was an aunt of the deceased, was speaking out and saying that the prosecution’s main witness was lying because she was at work and did not witness the shooting. The defence then insisted that the relative who identified the body should come to court,” said Neita Robertson.

She said that it was the insistence of the defence that really led to the witness admitting that she was lying.

The attorney also noted that the post-mortem report contradicted the manner in which the witness said the deceased was shot.

“It really pained my heart to see the men hugging up each other and crying each time they were brought to court and the case was put off,” shared Neita Robertson.

The saying ‘it is human to err’ did not pay off for Crosdale when he made a mistake with one of his court dates in 2010, he outlined in an interview last week.

“When the other accused called me to find out why I was not at court, I turned up at the Home Circuit Court the next day and told the judge what had happened. Although I had never missed a court date before and had been obeying the conditions of my bail to report to the police station daily, to my horror and surprise, the judge revoked my bail,” he recounted.

“I was then charged with absconding bail and taken before the St Andrew Parish Court. I explained to the judge that I had made a genuine mistake, but the judge warned me that if I dragged out the matter, I would get a longer sentence. So out of fear, I pleaded guilty and was sentenced to 30 days in prison,” he said.

Crosdale is upset that despite his innocence, he now has a conviction, and he doesn’t have the means to have it expunged from his record.

After spending three additional years behind bars, Crosdale was granted bail in 2013. He said that while in custody, he caught tuberculosis, and when he went home, his two daughters got it as well, forcing them to be hospitalised.

“The disease has left me with shortness of breath, and my daughters suffer frequently from asthma attacks,” said Crosdale, who was employed as a construction worker before he was arrested.

Cooper suffered from depression while in custody and had to be hospitalised. He said that because of the horrible and deplorable conditions in the facility and the fact that he was concerned about his girlfriend, who was pregnant at the time, “my head just go away on me”.

“It was a hard time I went through at the Horizon Remand Centre,” said Cooper, who still has visible injuries from what he said were the result of being assaulted by a correctional officer.

Noting that he has flashbacks and has not fully recovered from his ordeal, he added: “I was an innocent man helping my father to run his shop when I was arrested. I always tell my children and other young people that life behind bars is awful.”

Howard, who used to sell pet fish before he was arrested, said he suffers from short-term memory loss because a correctional officer used a baton to hit him on the head.

“This case mash up my life. All now my life can’t come back,” he stated, adding that the witness should have been punished by the court.

“A mad mi nearly mad!” Nugent said in June 2018 shortly after the prosecution offered no evidence against the men and the judge directed the jury to return a formal verdict of not guilty.

The men were first tried in April 2005, but a jury failed to arrive at a verdict and a retrial was ordered.