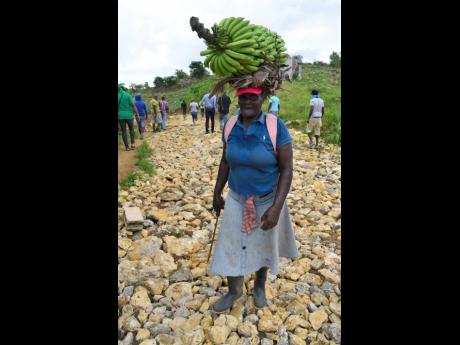 Ian Allen/Photographer
Sixty-five-year-old Gladys Watson balances a bunch of bananas as she walks carefully along the Hogs Run road in St Ann that is currently under construction. 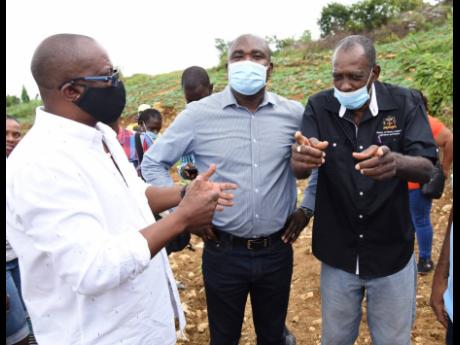 Ian Allen/Photographer
J.C. Hutchinson (right), minister without portfolio in the Ministry of Industry, Commerce, Agriculture and Fisheries, exchanges ideas about farming with Val Wint (left), councillor, and Zavia Mayne (centre), member of parliament for St Ann South West, on Thursday. The occasion was a tour of farms in Hogs Run, Gumma and Wild Cane in St Ann.
1
2

As pressure increases over queries of nepotism related to his demand that government lands be given to his live-in partner, Lola Marshall-Williams, de facto Agriculture Minister J.C. Hutchinson declined to pronounce on whether he should step aside about the disbursement of state benefits while investigations are under way within his ministry.

He also reserved comment on whether independent auditors should review the distribution of farm inputs and technical assistance funnelled to Marshall-Williams’ Holland Producers, which has not paid any money for one year’s possession of the property.

Hutchinson’s silence comes less than 24 hours after corruption watchdog National Integrity Action urged the Integrity Commission to probe the circumstances under which 2,400 acres of farmlands in St Elizabeth was handed to Holland Producers under a moratorium.

There have been conflicting accounts of how Sugar Company of Jamaica (SCJ) Holdings gave Holland Producers charge of Holland Estate last June. The lands are located in Hutchinson’s St Elizabeth North Western constituency, where his partner holds a position in the ruling Jamaica Labour Party.

Despite Hutchinson claiming in a press statement issued on Tuesday that he only gave guidance to SCJ Holdings, a leaked letter obtained by The Gleaner indicated that Hutchinson demanded that the farmlands be immediately transferred to his partner’s company.

It has also been revealed that Hutchinson’s son, Jason Hutchinson, operates a farm and garden supplies store on the property. SCJ Managing Director Joseph Shoucair denied having prior knowledge of that arrangement.

Hutchinson, who was on a wide-ranging rural tour in southwest St Ann and was the guest speaker at the official opening of the Bingham Hill farm road in the parish on Thursday, declined comment on the issue, deflecting questions from The Gleaner.

“I have nothing further to say,” was his response to a question about the effectiveness of the Rural Agricultural Development Authority (RADA), over which he has ministerial oversight, conducting an internal audit into its own operations.

Earlier, at the road-opening ceremony, Hutchinson lamented the fact that months after the Government first offered subventions to offload a surplus of farm produce amid the coronavirus pandemic, consumers are now faced with high prices as a result of scarcity.

He blamed supermarket operators and market vendors, whom he accused of taking advantage of farmers and jacking up prices.

“Everything, when you go to the supermarket, you find that the price is way up. In many instances, the persons who come and buy from you, you might be selling it at a reasonable rate, but when it goes to the market and the supermarket, you are surprised to see the prices … ,” said Hutchinson.

“You find that the price of produce has actually gone through the roof.”

Meanwhile, chief executive officer of RADA, Peter Thompson, said that the initial farm road budget had targeted 90 thoroughfares at an overall budget of $1.25 billion. However, this was significantly slashed to $525 million because of the impact of the COVID-19 pandemic.

“The big plan that we had for farm road projects, we had to scale back on it,” he admitted.

Hutchinson disclosed that for the 2019-20 financial year, a total of 77 roads were rehabilitated at a cost of $561 million, while for financial year 2020-21, $525 million was allocated for the rehabilitation of 56 farm roads.

“The rehabilitation of farm roads is a main priority to increase market access and improve transportation of produce to our farmers,” he told attendees at the opening ceremony.

St Ann has been allocated $15 million for the Production Incentive Programme, to be issued in tranches.

This programme aims to drive sustainable expansion of selected priority crops to facilitate recovery of the agricultural sector, based on the negative impact of the COVID-19 pandemic, as well as the prevailing drought.

To date, $2.38 million has been allocated for sweet and yellow yam, dasheen, and hot pepper production.