‘NONE OF YOUR BUSINESS!’ - Tufton rages at queries about cheating on wife as Market Me contracts entanglement swirls 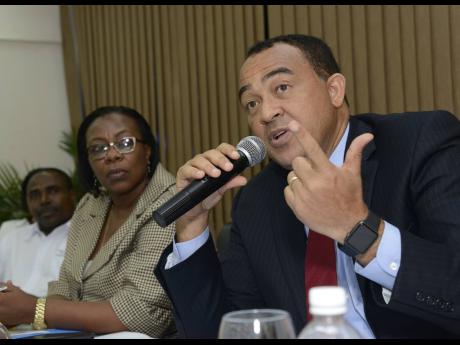 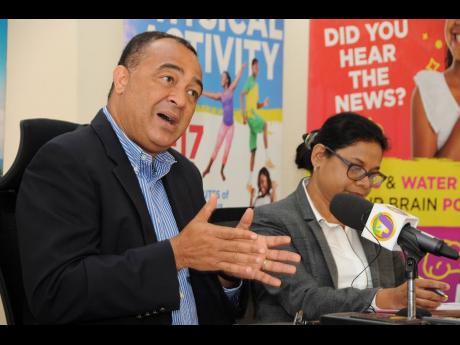 An agitated Dr Christopher Tufton, Jamaica’s minister of health and wellness, went on the offensive on Thursday evening when he bluntly told a reporter who asked if he cheated on his wife that it was “none of your business”.

“I would prefer you would stick to questions around the operations of the ministry, and just as I leave you to your private life, I would like you to allow me mine. Thank you very much,” a peeved Tufton hit back, as it emerged that Market Me Consulting Limited, a public-relations agency, had benefited from coronavirus-related contracts through an unsolicited proposal.

Following Tufton’s scathing retort, there was dead silence, at least for a few seconds, as Permanent Secretary Dunstan Bryan mouthed “Oh, my God!” before the digital press conference to update the country on COVID-19-related matters continued.

Swirling allegations on social-media platforms about Tufton and one of the principals of Market Me Consulting Limited triggered a caustic statement on Thursday from the minister, who threatened legal action against those responsible for the “filthy and scandalous” claims.

During the press briefing, The Gleaner’s reporter asked Tufton if he had a close affiliation with any of the directors of Market Me.

However, Zahra Burton of 18 Degrees North did a quick follow-up that left the minister fuming.

“I think the question that Edmond, maybe, wanted to ask was, maybe, not answered thoroughly. I just want to ask directly: Did you cheat on your wife with any of the principals ... (voice fades out)?”

The proverbial pin could have been heard, if dropped, as Bryan appeared befuddled, saying, “No, Minister,” apparently trying to advise Tufton not to respond. However, the annoyed minister insisted: “Let me answer!”

Tufton, in a statement issued hours earlier, had said that in recent days, there had been a “flood of vile, filthy, and scandalous allegations and innuendos on social media aimed at besmirching and tainting my good name and reputation.

“These disgusting, vicious, and false attributions made under the cover of social media have caused great pain and suffering and are clearly aimed at damaging my career, as well as causing emotional distress,” he stated.

Tufton disclosed that he has reported the matter to the Counter-Terrorism and Organised Crime Division of the Jamaica Constabulary Force. He has also placed the issue in the hands of his attorneys “to use all available legal steps to ensure the prosecution of these cybercriminals, and, in any event, to seek recourse in the civil courts when their identities are ascertained.”

The health minister said that part of the motivation, the attacks against him, were aimed at his public office, “but I will not be deterred in doing my job to the best of my ability and in service of my country”.

Bryan had earlier explained that Market Me made an unsolicited proposal, “which required that a direct contracting was approved and that approval was granted by the National Contracts Commission on December 2, 2016”. The initial contract was in the sum of $15.9 million, he said.

Another contract was awarded in the sum of $31 million for the Jamaica Moves programme in June 2019.

Asked if contracts had been awarded to Market Me since the onset of COVID-19, Bryan said “small payments” have been made to the company for “specific activities relating to the communication programme around COVID-19”. He said that payments for this service are made through purchase orders.

Bryan said that the minister did not recommend the company, but Market Me made an unsolicited proposal.

Asked if the Jamaica Information Service could have taken on the project with an entire department dedicated to public relations and communications, Bryan said it was a “social marketing behaviour-change contract”.

“The core of the Jamaica Moves intervention was around changing behaviour as it relates to health-seeking activities in terms of proper eating, knowing your health status, and also ensuring that you do the required amount of exercise to keep yourself healthy and reduce the impact of NCDs on the population,” Bryan said.

He indicated that the JIS would not have been able to carry out that exercise.

“Those skills are not necessarily readily available, and those are not the skills that we are dedicated to,” he added.

On Friday, People’s National Party Spokesman on Health Dr Morais Guy said he had taken note of a series of allegations on social media that have implicated the health minister and a principal of Market Me.

He also questioned whether the existence of multiple contracts between Market Me and the Ministry of Health and Wellness should trigger an investigation to ascertain whether Tufton used his position as the portfolio minister to steer, or influence, in part or whole, the contracts awarded to Market Me.

“The public needs to know whether these contracts were awarded based on the established due-process regime under the provisions of the country’s procurement guidelines,” Guy said.

“If true, it will amount to cronyism, nepotism, and the abuse of public office, which would then necessitate an immediate investigation by either the Integrity Commission or the Auditor General’s Department,” he added.