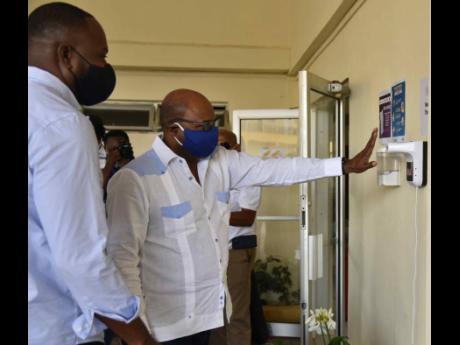 Contributed
Minister of Tourism Edmund Bartlett (right) adheres to the protocols of a temperature check and hand sanitisation with automated equipment ahead of entering the reception area of the Golf View Hotel in Mandeville. At left is owner/director of Golf View Hotel, Peter Campbell.

Tourism Minister Ed Bartlett has cautioned that a ban on travellers from the United States in a bid to contain COVID-19 would deliver a death blow to Jamaica’s hospitality industry.

His warning comes in the wake of The Bahamas announcing on Sunday that it was ordering an immediate lockout of travellers from America as coronavirus cases there surge to world-record levels, with nearly 80,000 new infections daily.

Florida is one of the major source markets for Jamaica’s travel sector, both with nationals and non-nationals, with the US state nicknamed Kingston 21 because of its high expatriate density. Jamaica had already flagged Florida, along with Texas, New York, and Arizona, as COVID-19 hotspots, but the Sunshine State has moved into territory of its own with more than 10,000 daily infections.

Global cases have topped 14 million and deaths are nearing 600,000.

Bartlett believes that Jamaica will have to weigh carefully the implications of a total ban on the US.

“It would die! We would have to close the industry,” Bartlett told The Gleaner on Sunday evening.

“Right now, all of the visitors who come to Jamaica in this first phase are from the US. This week will be the first flight coming in from the UK. If we should put a ban on the US, the effect of it would be to shut down the industry.”

Jamaica recorded 75 coronavirus cases between June 21 and July 8, with the majority being imported from the United States. That statistic, however, comes against the backdrop of a reported 10,000 sample backlog, which means that the country does not have a precise handle on how many cases really exist here. It also complicates the process of contact tracing, which might be triggered days, if not weeks, after infections take hold.

Minister of Health and Wellness Dr Christopher Tufton said on Sunday evening that there could be no lockout of US flights until Cabinet had mulled over that decision.

“Right now, we have the system in place to do surveillance and screening, but certainly, with opening up does come risks, and those risks are real, and some of those risks are totally out of our control.

“From the public-health standpoint, with every decision there is a risk, and we have to mitigate against the risk. It has to be recognised that we have seen an increase in cases over that period because we have relaxed some of the restrictions, but the truth is, it was expected,” Tufton said.

Bahamas Prime Minister Dr Hubert Minnis announced on Sunday that the country’s COVID-19 status had deteriorated at an exponential rate since reopening its borders. He said that effective midnight July 22, he would ban all international flights except for those coming from Canada, the United Kingdom, and other European countries. Bahamasair will also cease flights to the US.

As at July 19, Bahamas’ Ministry of Health confirmed 15 new cases of COVID-19, moving the total number to 153.

According to the northern Caribbean country’s Surveillance Unit, there have been 49 new cases since the full reopening of borders on July 1.

The total number of COVID-19 cases in Jamaica is 790, following 16 new positive results on Sunday. Fourteen of those cases are imported, all linked to flights from the US, while the other two were in relation to imported cases.

Bartlett was upbeat about the country’s testing protocols despite complaints by healthcare personnel that the system was on the verge of buckling because of insufficient manpower to evaluate travellers. He believes that the Resilient Corridor, which stretches along both the northern and southern coastlines, will keep the new coronavirus in check.

Tufton, too, backed that claim, but admitted that the healthcare mechanisms to verify movement could not keep up with the influx of travellers.

“If people stick to the protocols, we can minimise exposure. That’s really where the challenge is, when people are sent home.

“We have over 18,000 at home now. Are they staying? Are they going out? We are monitoring, but it’s harder to monitor the more people there are,” the health minister said.