Reason behind the beat! - Drummers and dancers dispel fear linked to Kumina 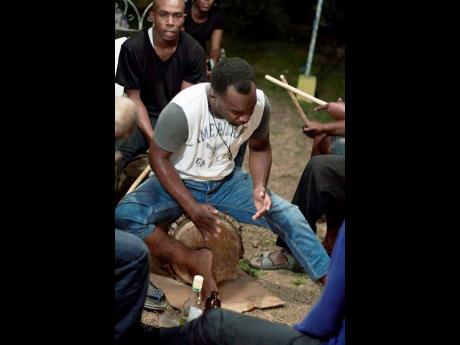 Contributed
Allen in full flight drumming up a beat.

Known for its high-spirited and hypnotic vibe, the Afro-Jamaican practice is usually used to mark the celebration of Emancipation Day across the island each year.

Especially common in areas of St. Thomas, the ancestral drumming is a huge feature in the commemoration of the abolition of slavery in Jamaica since 1834.

However, despite the cultural reason which characterises the practice, at least two popular drummers in the parish admitted that Kumina is still not widely accepted locally.

Kumina drummer and singer Bradley Thomas, who used to play for the locally renowned Kumina Queen Bernice Henry who died in 2014, told The Gleaner that there is much fear associated with the practice despite its cultural bearing.

“There’s still a lot to learn because nuff people fear it but who fear it doesn’t know the meaning of it. You can do good or you can do bad with it but some just don’t acknowledge the good part. Yes, drumming invokes spirits sometimes but you have to know what you doing and have someone there who can control it,” he explained.

He recounted the period in which he played for Bernice, noting that they would go to Seville Great House on July 31 and play until Emancipation Day. “It’s just a way to say thank you to the ancestors,” he shared.

Thomas now plays for the Kumba Kumina Group that is spearheaded by Nicholas Allen, who has been drumming ever since he was a child.

Adding to his colleague’s views, Allen said that many are still mentally imprisoned and ignorant of the reasons behind the beat, hence the common misconception and widespread fear.

“I think we are still mentally enslaved and a lot of things we would have expected to be different by now are not. This African tradition we have as Kumina is still not accepted by the wider society and that is still because of the colonial past we have whereby we have a more Eurocentric mindset,” he said, adding that part of his mantra as a professional drummer is to alleviate the fears associated with the culture.

Allen told The Gleaner that the establishment of the annual Tambu Festival in the parish, which takes place in July but was cancelled because of COVD-19 restrictions, is to bring about awareness of the concepts of drumming.

He shared that though Kumina is used on several occasions, its main purpose is to give thanks to the ancestors for the role they played in impacting freedom today.

“It’s a tribute to the ancestors, especially in this festive period. It’s showing appreciation to them and showing that we haven’t forgotten them and the struggles they went through in order for you to reach where we are,” he added.

Allen said that drumming puts him in a different state of mind. “It doesn’t matter what is happening in my life once I start playing, I forget about everything. I get that sense of freedom when playing. I don’t feel trapped or under pressure.”

Allen, who is in the third year of his studies as a medical student, told The Gleaner that no matter where life takes him, he will remain committed to bringing awareness to the true meaning of ancestral practices.