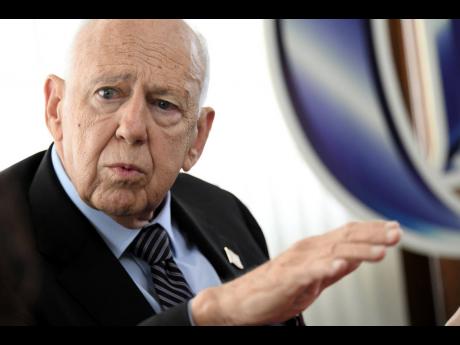 The Chinese Embassy in Kingston has unloaded on United States Ambassador Donald Tapia for suggesting that Chinese companies are a national security threat to Jamaica and has warned America not to open a Pandora’s box or suffer the consequences.

Chief of the Political Section, Xia Shaowu, expressed strong dissatisfaction and opposition on Wednesday to recent remarks made by Tapia on a Chinese firm doing business with Mahoe Gaming, an emerging Jamaican lottery company.

Mahoe, which was awarded a licence by the Betting, Gaming, and Lotteries Commission two weeks ago, is seeking to break the lottery monopoly now held by Supreme Ventures Limited. Genlot has developed its software.

Ratification of its licence will not take effect until government vetting is completed.

Xia excoriated Tapia for going so far as to use national security as a cover to attack Genlot and pressure the Jamaican State to exclude the Chinese company.

“His allegations about the Chinese company are baseless and discriminatory,” Xia said.

Additionally, he said that the real basis of the ambassador’s animosity towards Chinese companies was geopolitical.

Xia’s response comes amid a flurry of tweets from Tapia on August 3, one reading: “Genlot works closely with Huawei and as a Chinese company would be subject to the intrusive laws of the Chinese Communist Party.”

“However, I reiterate my concern that [for] the proposed technical services provided, Genlot must be thoroughly vetted to ensure that it does not endanger Jamaica’s national security or has access to the personal information of the millions of Americans who visit the island each year,” Tapia said.

America’s security chiefs are worried that Huawei’s equipment is designed to aid spying and would make its customers dependent on subsidised Chinese technology. But the Chinese Embassy in Kingston has rejected that posturing.

“The hypocrisy of the so-called fair competition touted by the US has been laid bare, seriously damaging its national credibility and image. If the US goes this way, then any country can take similar measures against any US company on the grounds of national security. The US must not open Pandora’s box, or it will suffer the consequences,” Xia said.

Pointing to what he said were facts, Xia said that Chinese companies have been cooperating with local partners all over the world over the past 30 years without cybersecurity breaches. He made a jab at the Trump administration and its roller-coaster struggle with a range of economic and social crises.

“It is injudicious, as an ambassador, to repeatedly make indiscreet remarks on the internal affairs of a host country and its foreign relations with other countries, and this should not be overlooked or tolerated,” the embassy spokesman said.

“We encourage the ambassador to focus on his own business and matters at home with gross racial injustices, the spike in COVID-19 cases, and the contracting economy. Given the challenging dynamics of the times, it would bode well for him to do more work conducive to strengthening the bilateral friendship and cooperation between the US and Jamaica.”

It is not the first time that Tapia’s rhetoric has caused unease for the Chinese. He has done so several times when his statements drew a stern defence of the Asian country’s human-rights record.

Before that, however, tensions between the two economic superpowers ratcheted up when US Secretary of State Mike Pompeo, on a visit to the island in January 2020, warned Caribbean governments to view with suspicion Chinese investments in the region.