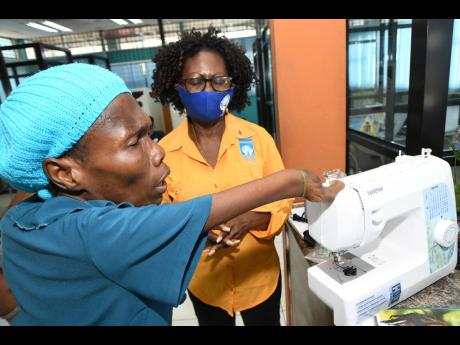 Rudolph Brown/Photographer
Daphne Williams (left) pronounces a blessing on her sewing machine after Claudette Christie, group marketing and communications manager of the Jamaica Co-operative Credit Union League, presented the donation in May Pen, Clarendon, on Wednesday. The 51-year-old, who has a deformed hand with only a thumb, sews clothes with the help of her feet.

Daphne Williams, a disabled vendor from Smithville in Clarendon, has lauded a team from the Community and Workers of Jamaica Co-operative Credit Union in May Pen that presented her with a sewing machine on Wednesday.

Williams, whose story was highlighted in the July 24, 2020, edition of The Gleaner, wowed readers with outsize self-reliance. She said it was her dream to acquire a sewing machine for her own business independence.

Williams, who has one hand which is deformed, has been showered with donations and well wishes since her plight and passion were highlighted in the newspaper.

“I feel honoured and overwhelmed to know people in Jamaica still care about people’s feelings. I give God thanks ‘cause they could have turned a blind eye,” Williams said.

“I feel more independent because now I can do my little thing. I can eat my food. I don’t have to be sitting down.”

Williams said that cushions and the now high-demand, face masks are the first items she will have available for sale.

“It is going be history when you see me on my machine in my little place and have my worker with me … . It’s going to be history,” she told The Gleaner, exuding confidence.

“People will have to make appointment to come to my office. No chakka-chakka supm,” she added, jokingly.

Sharing her plans to venture into charity, Williams said that sewing cushions for her church, Smithville Baptist, would be her first project.

She praised Tony Williams, who is unrelated, for his efforts to help her get her business off the ground.

“He calls me all the time, and because we have the same name, he calls me his cousin.”

Mr Williams, a Jamaican living overseas, said he was touched by Daphne’s story and felt compelled to assist. He was particularly inspired by her ambition.

“To know she has no hands and she isn’t begging money … she just wants to be independent. I asked her to go to the store and send me a picture of the machine she wants, so I had to get it for her.

“She’s asking for something that she can use to make life for herself,” Mr Williams told The Gleaner.

Daphne already has her eyes on a second machine as she intends to scale up her home business and hire staff over time. She said that she is sourcing raw material and hunting for a more business-friendly space.

“Business slow this side, but I am going to do some marketing so people can see the things. If they like it, I can get a little sale,” Daphne said.