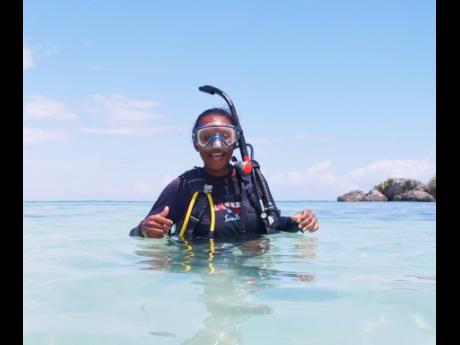 Contributed
Shari Kelly after a scuba-diving session in Negril, Jamaica.

She has travelled to approximately 19 countries, explored a range of cultures, and lived in France for a little under a year, but Shari Kelly says nothing compares to her homeland, Jamaica.

For Kelly, patriotic expressions should not be reserved for August 6 - Independence Day - but should instead be a lifestyle.

That’s why Kelly has never left her flag when travelling and proudly acknowledges her roots before she is even asked.

The 30-year-old globe trotter said that her love for Jamaica grows every time she visits a new country.

“In high school, I thought I would never live here. But after living in France and living in a racist section, it was always interesting to me that people who thought I was African, when they heard I was Jamaican, they would just light up,” Kelly told The Gleaner.

“ ... Everybody is so excited to say to me, ‘You from the land of Bob Marley and Usain Bolt’. Living there made me realise that being Jamaican was a spectacular thing.”

When asked if she would ever migrate, Kelly, in all honesty, said yes, but only to make Jamaica better.

Despite her experience of superior infrastructure, lower pollution, and more efficient modes of public transportation on many of her overseas trips, Kelly says Jamaica’s food, people, and culture have a compulsive power.

“... When you live away from home for a long time, you realise how much a chicken patty means to you, some ackee and salt fish, plantain, simple things like seeing a Maggie seasoning, or Milo ... ,” she said.

With Jamaica celebrating the 58th anniversary of its Independence today, Kelly had hoped that a mini version of the Grand Gala, a traditional festival staged in the National Stadium annually, could be held in each parish, even with COVID-19 crowd restrictions.

Kelly is hopeful that more Jamaicans understand the true meaning of independence.

“I don’t think we know what it truly means. ... I think for the older persons, it may have more significance. But I don’t think there has been enough effort to let it be understood by our generation,” she said.

“We are still clinging to aspects of the British system and archaic laws that are not serving us, and I want us to move away from that.”