‘It means the world to me’ - Sign-language interpreter, media man, and Anglican bishop among 130 Honours awardees 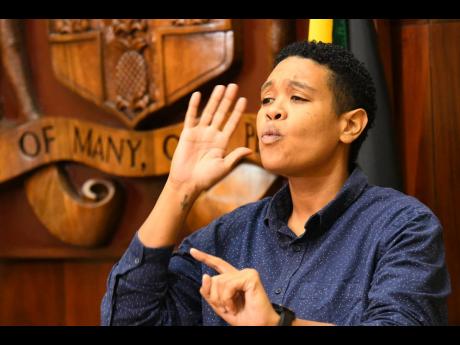 Speechless. That sums up the initial reaction of sign-language interpreter Antoinette Aiken, a household face beamed on TV screens and online, when she discovered that she would be inducted into the Order of Distinction (OD) in the rank of Officer, sharing National Honours and Awards with 129 other distinguished recipients.

Aiken, who is being recognised for outstanding contribution to the deaf community, said she was both happy and in disbelief when she got the call. She also feels humbled by the honour.

“There were no words. I actually said, ‘Hmmm.’ I had a whole lot of mixed emotions,” she told The Gleaner on Thursday, Independence Day, when the selections are formally published.

“It means the world to me. My journey has not been one of ease. This award also represents my community ... . It’s a whole world that propelled me into the hearing world,” Aiken remarked.

Among her accomplishments as an interpreter was signing for Barack Obama and when she was awarded the contract to work at the Houses of Parliament in Kingston.

Aiken’s first stint as an interpreter for a small stakeholder meeting in the education sector taught her the value of the community she serves and how to positively use critique.

“Deaf Can Coffee is my family, and one of my favourite moments was when I interpreted for the SEBI pitch competition, and they won that money. The joy I receive from watching the growth and watching Jamaica accepting deafness and what Deaf Can represents means everything to me,” she said.

Garfield Grandison started out by writing letters to the editor and then became a correspondent for The Gleaner while a student at Guy’s Hill High School in the early 1980s.

Today, Grandison is the company’s general manager and is among 31 inductees into the Order of Distinction, in the rank of Commander, “for his exceptional contribution to journalism and print media development”.

“I was very surprised but humbled. I did not expect it because in all my years in journalism, my aim and purpose was, and still is, to serve the people and to ensure that we have a fair and independent media, which is important for any modern democracy,” Grandison, editor-in-chief for 18 years, said.

“I accept this on behalf of people, the journalism profession, the people of St Mary – the parish I’m from,” he said of the fifth-highest national honour.

The transformation of the traditionally print-focused newsroom into a multimedia entity and The Gleaner’s involvement in special projects are among two of his major accomplishments.

Seven books have been published by the media company, including Usain Bolt: Legend and 50 Golden Moments, a visual celebration of the defining moments in Jamaica’s post-Independence history.

Another recipient of this honour is the Rt Reverend Robert Thompson, the retiring bishop of the Anglican Church after 47 years of ordained ministry.

Thompson will be recognised for his exceptional leadership in the Church and the community.

“I graciously acknowledge and accept it with thankfulness,” he said.

For Thompson, service comes naturally and is reflected in the number of school boards on which he has sat and the leadership offered to the Police Service Commission and the Kingston YMCA.

“When you offer service, certainly to the wider community as I have done, and it is acknowledged, you feel satisfied that it has been acknowledged beyond the walls of the Church,” Thompson told The Gleaner.

Professor Orlando Patterson will be inducted into the Order of Merit, the third-highest national honour, “for his highly distinguished international contribution to academia, West Indian literature, sociology, and the epistemology of social culture”.

Patterson, a Jamaican, is John Cowles professor of sociology at Harvard University in the United States and was recently appointed the chair of Jamaica’s Education Transformation Commission.

For her outstanding contribution to media, former Gleaner Lifestyle Editor Barbara Ellington is to be inducted into the Order of Distinction, Officer class. Broadcasters Henry Stennett and Pat Lazarus will also be honoured.

Meanwhile, four members of the Jamaica Constabulary Force who were shot during a predawn operation in Horizon Park, St Catherine, on June 12, are to receive the Medal of Honour for Gallantry.

The recipients will be formally recognised in a ceremony on National Heroes Day, October 19.