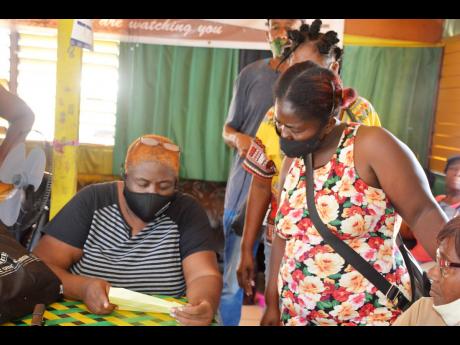 Photo by Janet Silvera
President of the Harbour Street Craft Market, Melody Haughton (seated), tends to some of the members of her association who have grown weary of awaiting state benefits tied to the coronavirus pandemic.

Five working days have turned into two months and no visible end in sight for craft merchants who were promised ‘We Care’ grants by the Government as the COVID-19 pandemic and restrictions walloped the Jamaican economy.

The group of approximately 75, mainly women with tourism-dependent businesses operating at the Harbour Street Craft Market in downtown Montego Bay, say that they have hardly earned a cent since March when the country locked its borders as a result of the coronavirus crisis.

Grouped under the $40,000 stimulus package announced by the Government, they applied officially for the grant in April, received notification and tracking numbers from We Care representatives that their monies were at the bank at the end of June, but two months later, they say are still empty-handed.

“I have been to the bank at least 10 times, and now when I am to go, I feel like a scammer because they now know me so well they beckon to me that no money has come in my name,” a sombre Genita Guthrie-Smith told The Gleaner.

“They make us feel like we are thieves, so much so that if I get some guineps now to sell or a job to weed a yard, I will, because it is that bad,” the 70-year-old said, her voice full of frustration.

Her neighbour, Claudette Simms, whose We Care number is G20420024C, is asking the Ministry of Finance to intervene and force the people dealing with their cases to stop sending them to the bank.

“When we call We Care, sometimes we are placed on hold for hours, and they don’t return,” Simms said, bemoaning that the many trips she has made to Gateway Cooperative Credit Union have made her feet ache.

Guthrie-Smith says her bills are piling up and that she is no longer able to purchase medication.

Pauline Cooper and Lorna Leach say the situation has become so embarrassing that the bank has given their own account number to use as a reference for We Care personnel to use when they do decide to make the payment.

“Up to [July 31], I made contact with We Care, and they said they would make contact with the bank,” Leach, whose reference number is G204814D7C, told The Gleaner.

In the case of Simms, at least one person in her shop was paid. “My assistant got her money, and the licence to operate the shop is mine,” she said.

They said that of 500-plus craft merchants in the market, more than 250 have received their grant. It is believed that those who have not been paying fees to the St James Municipal Corporation were deemed ineligible.

Eugennie Wynter, who has been a merchant for some 30 years at the facility, said that she was told that she was not eligible for the grant. Her application was not approved, yet persons who reportedly applied as recently as June 29 were paid.

“It is unfair for me, who has been licensed for so long, to not receive, while people who just came on the system have,” she told The Gleaner.

Wynter said that she appealed, and the Tourism Product Development Company (TPDCo), the lead agency monitoring the project, located her name on the system. However, it has been six weeks and to no avail.

President of the association, Melody Haughton, concurred, stating that the TPDCo system was not efficient.

“Every week we are told that it is being sorted out and we will be paid next week,” Haughton said.

They have even received notifications that their funds were available only to visit the bank and find nothing.

They are calling for a meeting with Minister of Finance Dr Nigel Clarke.

According to a number of merchants at the Old Fort, Success, and Holiday craft markets, they have not received grant funding either.

Some taxi drivers who are members of the Jamaica Union of Travellers Association, Maxi, and JCAL have also claimed to have not received funding.

Clarke, when contacted, said that he could not comment without contacting the people involved.

He has since spoken with the president of the Harbour Street facility.