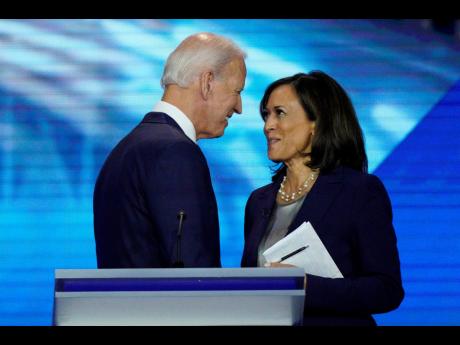 AP
In this September 12, 2019, file photo, Democratic presidential candidate Joe Biden speaks with then candidate Senator Kamala Harris. Biden confirmed on Tuesday that she would be his running mate.

That was the effusive praise from expatriates to news that Joe Biden, former United States vice president and presumptive Democratic nominee for president, had selected Jamaica-descended California Senator Kamala Harris to be his running mate in the November 3 election.

“As a woman with Jamaican roots, her elevation shows that as a country, Jamaica has developed many nuggets who have made their mark on the global stage,” Clare told The Gleaner on Tuesday.

Dr Basil Wilson, former lecturer, said that he was not surprised at her selection.

“As a Jamaican, it is another recognition of the impact Jamaicans have had on the global scene,” he said.

Wilson described the selection as a “hell of a breakthrough”.

Harris served as district attorney in California before running a successful campaign to fill the Senate seat vacated by Barbara Boxer.

She is the first woman of colour to be selected as a vice-presidential nominee.

In making the announcement, Biden said that Harris was the best person to help him to take the fight to the current president, Donald Trump.

Harris, reacting to the VP pick, said that she was “honoured” to be the nominee.

Noel Mignott, head of the PM Group, said that Harris, whose father is Jamaican and mother is Indian, is a distinguished public servant who understands the concerns of minorities and women.

“Like former Secretary of State General Colin Powell, she does Jamaica proud,” he said.

“We are at a significant level in our history, and her selection sends a message that the Biden-Harris team wants to unite the country,” she said.

Dorrette Aarons said it is a moment in history that no one will forget.

“I am so happy not only because she is of Jamaican roots, but the fact that she is a woman of colour,” she said.

“She is a brilliant woman.”