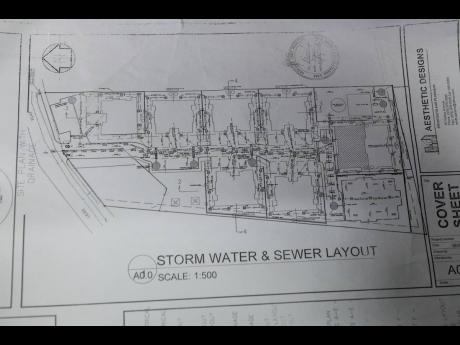 Contributed
The drawings for the development show plans to build on a section of a neighbour’s property. 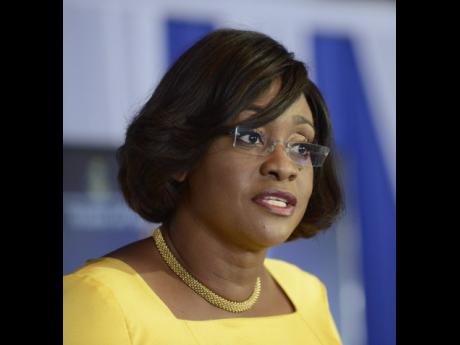 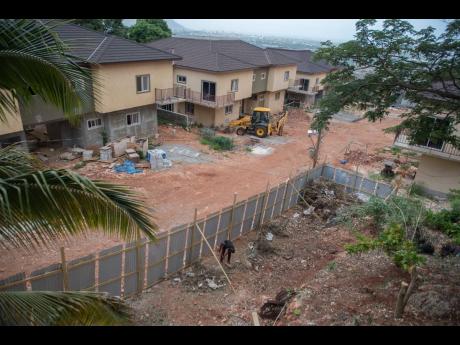 Gladstone Taylor/Multimedia Photo Editor
A section of the property being developed by JAJ Development and Holdings Ltd in Leas Flat, St Andrew, which is causing jitters among residents of three surrounding neighbourhoods. 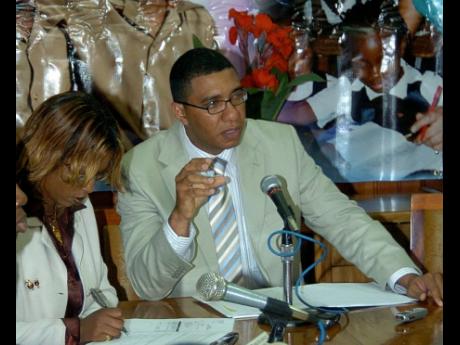 File
In this 2008 Gleaner file photo, Education Minister Andrew Holness addresses educators during a round table discussion on literacy held at the Ministry of Education in Kingston as Dr Charlene Ashley, communications director at the Ministry of Education, makes notes. Ashley is president of the Leas Flat Citizens’ Association, which is among three community groups pleading for the now prime minister’s intervention in a property dispute involving his wife’s company.
1
2
3
4

Juliet was the member of parliament for St Andrew East Rural up to last week’s dissolution of Parliament to make way for the September 3 general election.

The residents of Leas Flat, Forest Hills and East Kirkland Heights raised issues about two developments in an August 10, 2020 letter addressed to the prime minister, who has responsibility for housing, land and environment.

The first matter relates to a bus stop they claim was moved “without notice or consultation” to facilitate developments at lots two and three, Block C in Leas Flat, Red Hills.

The second unrelated issue features Juliet’s development at Lot 21A and Lot 21B, Leas Flat, which the residents say makes them “extremely concerned”.

Insisting they are not against development, they are demanding “urgent remedy to mitigate the devaluation of our property and of our neighbourhood and the quality of life of the citizens in whose interests the Government is expected to act”.

Sewage impact, number of habitable rooms approved for the property, traffic, fire prevention provision, green space and privacy are among the key concerns.

Emerging, too, is a legal battle between the developer and a resident, Dr Charlene Ashley, who is contending that her house and land are contained within the government-approved boundaries of Juliet’s development.

Ashley, who is also the president of the Leas Flat Citizens’ Association, had sold a piece of her land (part two of Lot 21A) to Juliet, who is one of two directors and the majority shareholder of JAJ Development and Holdings Ltd, for $22 million in 2012.

The following year, approval was given by National Environment and Planning Agency (NEPA) and the Kingston and St Andrew Municipal Corporation (KSAMC), for construction of multi-family and single-family dwellings on the land. The permits were amended in 2019.

But with the development now 60 per cent complete, residents are raising alarm.

“In review of the approvals, along with the approved drawings, there appears to be substantive anomalies and/or breaches in numerous instances,” read a section of the letter sent by the residents and signed for by an official at the Office of the Prime Minister (OPM) on August 11.

Chief among the concerns is what they claim was the approval of more habitable rooms per acre than allowed by law. Habitable rooms include living room and bedrooms, but exclude verandas, bathrooms, and kitchens.

Using the report of Dr Earl Bailey, an urban planner contracted by Ashley, the residents argue that 96 rooms were identified on the approved plan, “which is above the highest allowable habitable rooms for the acreage under consideration”.

“The actual number of habitable rooms seems to exceed 120 habitable rooms. This points to a disparity between the summary metrics on the cover page on the set of stamped and approved drawings and what is reflected on the detailed drawings,” they argued.

Up to press time, the OPM was yet to respond to questions submitted by The Sunday Gleaner last Thursday on the matter.

Asked to confirm the total acreage for JAJ’s development, NEPA said the total lot area “as presented in the application is 9,150.45 square metres”, which works out to be approximately 2.3 acres.

The agency said that although some construction activities were yet to start, it was satisfied that the development was proceeding according to approval and in compliance with the law.

“At present, the agency has not identified any serious concerns as it relates to the development,” it said, pointing to its two site inspections on February 13, 2014 and August 11, 2020 – the day the letter reached the OPM.

However, The Sunday Gleaner has obtained copies of some of the drawings and the assessor’s July 2020 report, which show that approximately 120 habitable rooms were identified, above the 78 that would be permitted based on the size of the lot.

The assessor’s report also shows that despite the 2019 approval for two additional blocks, “there is no evidence that the amendments to increase the habitable room per acre were met with commensurate increase in the proposed area for the development”.

“An increase in allowable density and habitable rooms would logically result from an increase in land area to accommodate these additional habitable rooms,” the planner said, questioning whether Ashley’s lot (0.5 acres) was included in the calculations to win approval for higher density.

It’s on that basis that the residents want the KSAMC and NEPA to rescind permission allowing the construction of the additional units and conduct a range of impact assessments to cover the environment and traffic.

Bailey, who confirmed doing the report, also noted that the sewerage system may pose problems because what has been constructed “reveals a departure from what is shown on the diagram (sheet A1.0) and the requirement set by NEPA and the KSAMC”.

“There seems to be only provision for an absorption pit and no evidence of biodigester, gravel filter bed and chlorine chamber. Additionally, there may be concerns regarding the placement of the absorption pit in an area dominated by a steep slope,” the urban planner said.

NEPA said that JAJ’s application and approval for sewage treatment “is pending”.

Meanwhile, in a response to Sunday Gleaner queries, JAJ’s lawyer, Rose Bennett-Cooper, said, “To the best of JAJ’s knowledge, the development is approved by the relevant authorities in accordance with their governing policies and procedures.”

She said that JAJ was not aware of the residents’ letter.

Bennett-Cooper also revealed that JAJ filed a claim in the Supreme Court on August 7, asking for an order compelling Ashley to turn over the title for her section of Lot 21A in accordance with the 2012 sales agreement.

In her affidavit, Juliet Holness said that under the sales agreement with Ashley, she was entitled to a copy of the title, free from any obligations such as mortgages, after paying the $7 million deposit.

However, this has not been handed over even though the request was made on October 30, 2012.

The developer said the situation was causing her “severe hardship” and created an environment for “errors” in the application process.

“For example, the requirement is that some application diagrams must show ‘as is’ buildings situated on each relevant title, and the defendant’s home is situated on the single/unsplintered title, which now still contains lots 1 and 2,” she added.

However, Ashley, who headed communications for the Andrew Holness-led education ministry more than a decade ago, has hit back, arguing that the title could not be provided because she was not “privy” to the approved plans for the development and only recently found out her property was enclosed in the development.

“It was when she made great efforts under great resistance that she finally got copies of the approved plans [from KSAMC],” said Knight, Junor & Samuels, the firm representing the resident, adding that “it is clear that this baseless lawsuit is a faint attempt at damage control.”

The Sunday Gleaner has obtained a copy of a letter in which Juliet’s lawyer appears to make a concession, informing that new drawings were to be submitted on August 7 to the KSAMC for approval.

“Upon review of the drawings for the development, it is noted that there is an error in calculation, which affects the density,” read a section of the redacted July 30 letter addressed to Ashley’s attorneys.

The nature of the error was not clear because of the redaction, but the developer explained that it was making amendments to the drawings and that the “error is not reflected in any of the works on the ground and requires no physical change”.

JAJ’s attorney also said Ashley is to be “cautioned that the development plans submitted to the authorities are not matters of public record in a manner such that she is entitled to unlimited access and copies … [that] the developer has private and proprietary and other rights to these drawings and documents”.

“It is expected that the relevant authorities will maintain and respect confidentiality of these drawings and documents in the usual manner,” the letter concluded.

The KSAMC is yet to respond to a list of questions submitted by The Sunday Gleaner last Tuesday, but its chief executive officer, Robert Hill, has provided a brief statement, noting that the issue is being reviewed by the corporation’s technical officers.

He said a report will be provided “shortly”.

Hill, meanwhile, is expected to meet with the residents later this month to respond to concerns they outlined in a July letter to him.

“We have a right, as citizens living in the area, to know what development is taking place, and how this is going to impact our lives,” said a representative of the three citizens’ associations, who did not want to be identified.

A visit to Lots 21A and 21B showed six hatched structures, including Ashley’s house, along with an unroofed structure.

WHAT HAS BEEN APPROVED

• Block G containing parking at the ground floor level and two studio and two one-bedroom units on the first to third floor.