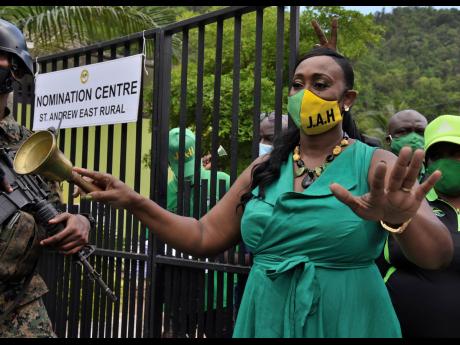 Ian Allen/Photographer
Juliet Holness as she leaves the nomination centre in Gordon Town on Tuesday, August 18. 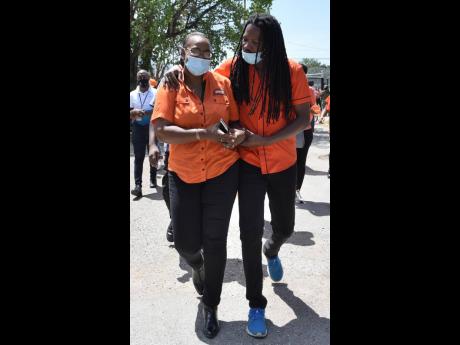 Venesha Phillips, councillor for the Papine division in St Andrew Eastern, moved into the big league on Tuesday when she secured the People’s National Party (PNP) nomination against incumbent Fayval Williams.

Accompanied by about 300 supporters who settled at a section of Mona Road, across the road from Papine High, she was the first to be nominated, arriving just after 10:30 a.m.

Security personnel enforced COVID-19 electoral protocols. Only 10 selected individuals whose names appeared on the voters’ list were allowed to enter.

They were all directed to the handwashing station before entering.

With nomination out of the way, Phillips said her campaign would be surgical.

“What we do now is to operationalise of campaign strategies and keeping together our voter commitments list, ensuring that we stay in touch daily, be more vigilant on the ground more than we have been to ensure that there is no intimidation. We are sticking close to our canvass,” Phillips said post-nomination.

Brown was challenged on the 10-person rule but stood his ground, even as he was presented with a video purporting to be that of another PNP candidate being allowed to facilitate more than 10 backers.

“I don’t care what your video is saying. Only 10 persons will accompany the candidate on to the compound. Until I get other instructions from the EOJ (Electoral Office of Jamaica), that rule stands,” he insisted.

Juliet Holness, the incumbent candidate, rolled into Gordon Town Square after 1 p.m. with a large convoy of motorcyclists whose antics raised eyebrows but no reprimand from the police or soldiers.

Fifteen minutes later, she emerged in Gordon Town, her body visible from the sunroof of the vehicle in which she travelled, sporting a maxi green dress, nail colours to match and ringing a bell.

“It’s very different. We have actually asked our supporters to stay in their respective communities. I am actually still surprised to see the number of persons here,” Holness told The Gleaner.

Holness, who is seeking her second term, said the viral pandemic has altered campaign efforts but oozed confidence about the electoral outcome.

“To be honest it is not a challenging campaign because a lot of work in East Rural St Andrew has been done, and it is now more just moving around and touching back base with my constituency family,”she said.

Earlier, PNP challenger Joan Gordon-Webley arrived with a large convoy of vehicles carrying supporters. Police ushered them out of the small town square before Holness’ arrival.