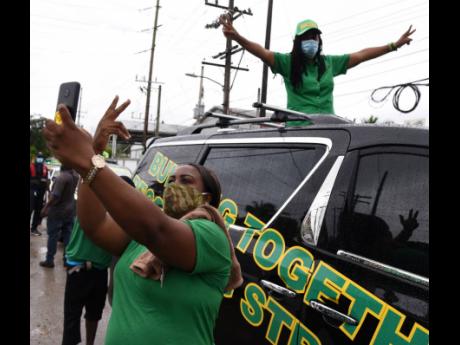 Ian Allen/Photographer
Natalie Campbell-Rodriques, Jamaica Labour Party candidate for St Catherine North Central, greets supporters during a tour of the constituency with the prime minister on Thursday. Jamaicans go to the polls on September 3.

Braving the inclement weather on Thursday, Prime Minister Andrew Holness led a motorcade through three constituencies in St Catherine, two of which are up for grabs in the September 3 general election.

Despite the showers associated with a tropical depression that formed on Thursday over the west-central Caribbean Sea, supporters of the Jamaica Labour Party (JLP) lined the streets in several towns and communities waving and cheering on Holness and the party’s candidates for the three constituencies.

Natalie Campbell-Rodriques, the JLP’s candidate for St Catherine North Central, who is up against the incumbent, Natalie Neita, of the People’s National Party (PNP), sought to whip up support as the motorcade wended its way through Bog Walk.

Holness and Campbell-Rodriques waved to enthusiastic supporters while standing up through the sunroofs of their vehicles.

In 2016, Neita beat back the challenge of the JLP’s Kerensia Morrison, winning by a margin of 1,306 votes.

St Catherine North West, a PNP stronghold for the last three decades, is being targeted by the ruling party, whose candidate, Newton Amos, has vowed to hand over the seat to the JLP after the votes are counted on September 3.

However, Hugh Graham has different ideas, saying that support for the PNP remains strong in the constituency.

Graham has scored three wins as councillor in the Lluidas Vale division.

The motorcade swelled by the time it reached Linstead, where many in the busy town took out their phones to get pictures and videos of the prime minister and Amos. Supporters shouted JLP slogans and greeted each other with the party’s V-sign as the motorcade inched its way through the town.