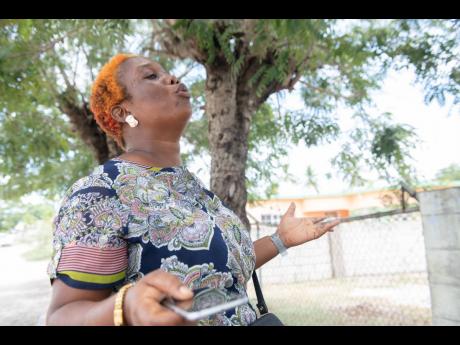 Gladstone Taylor/Multimedia Photo Editor
People’s National Party activist Nadine is convinced that in order for Patricia Duncan Sutherland to win the Clarendon South Eastern seat for the party, she will have to cut the Jamaica Labour Party’s margin in Hayes.

The People’s National Party (PNP) has locked the Rocky Point division into its cross hairs as it aims to wrest the Clarendon South Eastern seat from the Jamaica Labour Party (JLP) come next week.

In the February 2016 general election, the Rocky Point division accounted for 3,177 of the 9,997 votes received by the JLP in the constituency. The PNP got 2,401 in the division and 9,039 across Clarendon South Eastern.

“Rocky Point is a stronghold for Labourite. Mitchell Town is a strong area for them,” PNP indoor agent Nadine said as she explained to The Gleaner why the party will be targeting Rocky Point to get Patricia Duncan Sutherland into Gordon House.

Nadine reasoned also that there were other pockets of strongholds for the JLP in the constituency, but reducing the margin in Rocky Point would have more impact on the outcome of the September 3 polls.

Another PNP activist, who gave her name as Joan, argued that targeting Rocky Point could be the wrong strategy and that the Comrades needed to focus on widening the margin in Hayes to defeat the Labourites.

“Everybody a talk bout we must go after Rocky Point. No! Rocky Point is JLP and Hayes is PNP. JLP people not going to change. Is like you asking me fi vote fi JLP although me a PNP. No! Me might vex and nuh vote, but me nah vote fi Labourite. Is so the JLP dem a do to. So you have to bring out more people in Hayes,” Joan contended as she spoke to The Gleaner in Raymonds, Hayes.

Comrade Nadine, 37, told The Gleaner that while she has a good relationship with Rudyard Spencer, the former JLP member of parliament, who she would see from time to time in the constituency, she has only seen JLP candidate Pearnel Charles Jr once.

“Me nuh know nothing ‘bout Pearnel,” she claimed.

Charles Jr was parachuted into the seat earlier this year to contest the March 2 by-election following the sudden resignation of Spencer from representational politics.