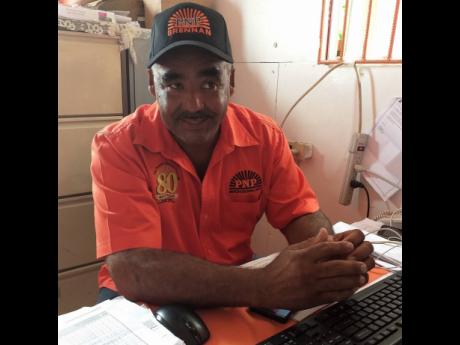 Hours after learning he had a more than an eight percentage point lead over his People’s National Party (PNP) rival, Robert Nesta Morgan and a small team of campaigners walked the community of Diamond on Thursday to leave no stone – or vote – unturned.

Morgan said that despite the distance between himself and Desmond Brennan, he knows that the ultimate decision centres on who carries more weight in the ballot boxes of the Clarendon North Central constituency.

The Jamaica Labour Party (JLP) candidate is leading in Mocho and Rock River, two of the three divisions in the central Jamaica seat, according to a Gleaner-commissioned Don Anderson poll conducted between August 22 and 25. Brennan has the sway in the traditional PNP divisional stronghold of Chapelton.

Both candidates have expressed confidence going into the September 3 general election in a seat where the Labourites haemorrhaged much ground in the 2016 polls.

“What I spend a lot of time concerned about is our ability to reach as many people as much as possible before election day,” Morgan, parliamentary secretary in the Office of the Prime Minister, told The Gleaner while on the hustings in his home town.

“At the end of the day, what determines whether a person wins or loses is how many votes they can get into the ballot box on the third of September. And that is what consumes our minds.”

Candidates have been forced to suspend political motorcades and scrap mass meetings as the second wave of the coronavirus pandemic sweeps through Jamaica, with cases nearing the 2,000 mark.

Morgan said that his campaign team, including councillors, was in the last stages of planning the mobilisation of voters in what will be a war of attrition on election day

“We are sitting down planning, strategising, and getting all the resources together to ensure that on election day, when the polls close, there is only one winner and it’s the JLP and my campaign,” Morgan said.

Not daunted by numbers

Brennan, who the Anderson polls said was trailing badly in Rock River and Mocho, said he was not daunted by the numbers.

Anderson’s polls, which have a margin of error of 3.5 per cent, showed the medical doctor holding the Chapelton division 36.1 per cent to Morgan’s 31.5. Rock River was in a statistical dead heat, with 29.2 per cent for the PNP and 31.1 to the JLP, but Brennan is losing by 8.3 percentage points in Mocho.

Brennan told The Gleaner that his “reaction is one of calm and tranquillity”, adding that he was not fazed.

“One of the numbers add up to 80 per and the other two add to 100 per cent. It raises questions,” said Brennan at his office in the town of Chapelton.

“But I will continue meeting the people and explain to them my vision for the development of the constituency, showing them how they have been kept deprived for years.

But pollster Don Anderson defended the findings, saying that the poll average was indeed correct. He said that a snafu in the transfer of the Mocho numbers meant that Morgan actually had 51.1 per cent in the division.

Brennan has criticised the Morgan campaign for its “flood” of “promises and trivial gifts”, but he said that he would not promise heavenly highways, but will fix one road at a time

Both candidates have strong support in the constituency.

Orville Binns said that he would vote for Morgan because the “future brighter for the youths under Andrew Holness government.

“People going to vote because of Andrew Holness,” he said, confirming several opinion polls that have shown the prime minister to be far more popular than the opposition leader, Dr Peter Phillips.

Shane Thomas said he is a foot soldier for Brennan, who was defeated by the then Member of Parliament Pearnel Charles Sr in 2016. Thomas believes that Brennan will win.

“He was a first-time challenger and come within 500 of defeating a 20-year veteran. Is his time now,” Thomas said.