Mrs Holness, ‘Yuh can come back and say thanks’ - Residents of forgotten community plead for better roads 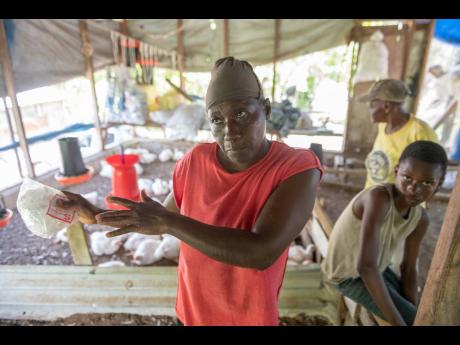 Residents of Somerset district in St Andrew East Rural said, in mid-August, that the last time they saw their member of parliament, Juliet Holness, was during her campaign for the seat in the 2016 general election.

From deplorable roads to no electricity, complaints are mounting in the hillside district.

Though they are constituents of St Andrew East Rural, the residents are forced to get to their community by traversing ramshackle roads in St Thomas, along rough terrain more akin to tracks, as access via public transportation is virtually impossible.

As Marleshia Richards and Carlton Lindsay worked on a house, they both underscored that poor representation has been a years-long lament for residents who live, proverbially, behind God’s back.

“If a 120 of we up here, we count, because they come for the votes. Our councillor is not far away, and we hardly see her. We should get more attention. Reason why: remember, this is Juliet Holness’ constituency, and she is the prime minister wife. I don’t think they doing that in Bull Bay or those other areas that have 500 or 1,000,” Richards said.

Lindsay’s grouse is the painful truth that constituents in small, remote locations face during election campaigns. They are often the forgotten few when political calculation meets the reality of economic pragmatism. Crudely, how much is a vote worth?

Somerset comprises roughly 60 households, according to the residents, who did a count on hand. They say it costs them $250 extra for taxi fare because they live well beyond route limits.

It costs up to $400 to travel from Poor Man’s Corner in St Thomas.

Schoolchildren are also at a disadvantage, Richards told The Gleaner.

“Some have to get up from like 4 in the morning ‘cause some of dem go as far as St Thomas Technical, Kingston, and have to come back in the night same way,” said Richards.

Despite those grim realities, the residents of Somerset say they know they will not be provided with good roads but have begged that certain spots along the track be patched to alleviate their journey.

Alice Johnson, an elderly woman who lives in the farming community, said that she could not remember the last time she laid eyes on the member of parliament or councillor.

As she pointed to her daughters, who were tending to chickens on their farm, Johnson emphasised that the bad roads had made life miserable.

“When dem know that election deh near, that’s when dem run in. It’s not fair,” she said.

Vevet Johnson also bemoaned the lack of advocacy from Holness.

Her sister, Emeline, echoed Alice’s complaint that roads were their biggest problem. She insisted that they were hard-working, independent-minded people who were not begging for handouts.

“I am a Labourite and will forever be a Labourite. When dem win the last time, the big tank top outside there, mi climb and rejoice ‘cause mi happy for the lady weh win, but from she win, she don’t come back here,” Emeline said.

“... Yuh win. Yuh can come back and say thanks. Don’t send somebody ‘cause a nuh dem we vote for.”

The residents acknowledged that they had received food and care packages since the onset of the coronavirus outbreak in Jamaica but said that could not ease the core of their distress.

“We still want to see you. We nuh want no food; we nuh hungry. We want we road fi fix,” Emeline said.

Several attempts have been made to contact Holness, but messages left with constituency staff have not been returned.

Matthew Samuda, head of public relations for the Jamaica Labour Party (JLP), rubbished the claims made by residents and cited “political mischief” amid the current election climate.

“I think it’s widely known nationally that Mrs Holness is one of the top-performing MPs,” Samuda told The Gleaner on Sunday.

Samuda, however, noted that the JLP would not brush aside the pleas of citizens.