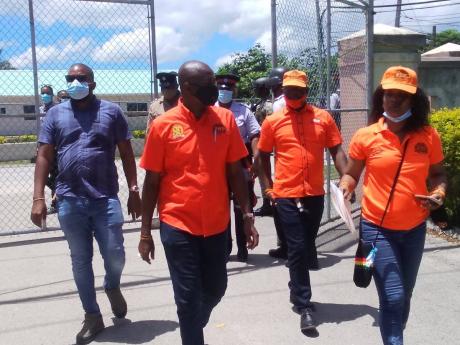 Photo by Hopeton Bucknor
People’s National Party incumbent (second left) Ian Hayles walking with supporters to the nomination centre in Hanover Western to secure his place on the ballot on August 18.

Despite the buzz around his Jamaica Labour Party (JLP) challenger, Tamika Davis, Ian Hayles of the People’s National Party (PNP) is flush with confidence that come September 3, he will retain his seat as member of parliament (MP) for Hanover Western.

“Motorcade and Clarks don’t win election. The people need to know your plan, and with just [a few] days to go, she has not presented a plan,” Hayles said of Davis as he spoke with The Gleaner recently.

While the JLP is targeting the seat, which has had a history of that party being stronger in the Lucea and Riverside divisions and the PNP dominant in Cauldwell and Green Island, Hayles says his record as MP since 2007, which saw him serving nine of those years under a JLP administration, is quite solid.

“I have been a worker even when I was not getting any support when the JLP formed the Government,” said Hayles, who came close to winning the Riverside division in 2016. “In addition to the provision of things like roads and water, I have done several scholarship projects for the young people, provided computers in schools, and even built schools. I have a record of performance in this constituency, albeit only four years under a PNP administration.”

Hayles said that at the onset of the COVID-19 pandemic locally when the Government was slow in responding to the needs of the people, he was making sure that the requisite provisions were made to keep the parish safe.

Hanover was the last parish to record a case of the deadly virus.

“Long before the Government made the wearing of masks mandatory, I provided 10,000 masks to my constituency. I also ensured that all vehicles in the public transportation sector were regularly sanitised. Working along with the support of some caring charities, I also helped to ensure that thousands of persons were provided with healthcare packages,” said Hayles. “I am always here for the people and they know … . I am out there working on their behalf every day.”

“Unlike me, my opponent has no achievements to show the people; she does not even live in the constituency,” continued Hayles. “All politics is local ... . Going around with a big smile is not a plan and I am sure the people have seen through that.”

Hayles rejected criticisms that the constituency has been under-represented as it relates to the provision of roads and water in some communities.

“You can’t fault me without faulting the JLP [Government] because I have been making representation but not getting the support that I need … but still, even without the support of the Government, I had still managed to accomplish much. The people can be assured that when the PNP forms the next Government, things will get even better for them,” said Hayles.

Having conquered JLP challengers Donovan Hamilton (2007 and 2011) and Brian Wallace (2016) in securing his three terms, the confident Hayles believes that like those before her, Davis will buckle come election day, giving him yet another victory.

“I am not watching the hype. Like in my previous three terms, I have been putting in the work and against the odds, getting results for the people,” said Hayles.