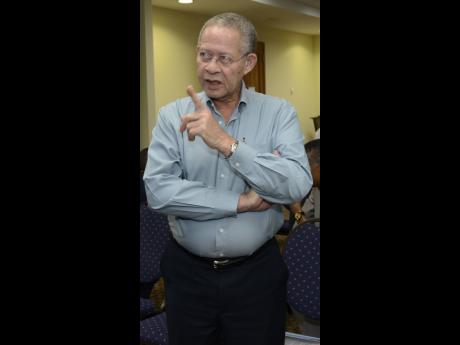 A second term with a crucial parliamentary majority sets the stage for legacy-defining actions from Prime Minister Andrew Holness, asserts Bruce Golding, the former head of government who paved the way for Holness’ ascent to high office.

In last Thursday’s humiliation of the People’s National Party (PNP), the Holness-led Jamaica Labour Party (JLP) romped to a 49-14 seat victory in the parliamentary election in excess of the two-thirds majority (42) needed in the House of Representatives to initiate radical constitutional changes.

A similar two-thirds support is needed in the Senate, which has been so designed to make it difficult to achieve since a government would need at least one of eight Opposition senators to side with its 13 to reach the target.

Even after that, some changes, like replacing the Queen, further require a referendum.

“It could be [his legacy-making term], but he’s going to run into the problems that I ran into that even though he has more than a two-thirds majority in the House, he has to get the Opposition to agree,” Golding said of the big constitutional reform issues that, if achieved, could define Holness’ place in history.

Golding said during his time (2007–2011), he had taken bills to Parliament dealing with fixed election dates and term limits for prime ministers, but “I couldn’t get the support of the Opposition”.

But, unlike Golding, Holness will have a two-thirds majority and has consistently talked of the need to change the governance “architecture” of the society, including how judges are appointed, impeachment of public officials, in addition to term limits and fixed elections.

One of the big issues has been turning Jamaica into a republic by removing Britain’s Queen Elizabeth II as head of state, a populist magnet for votes used by both parties.

The last administration with a two-thirds majority in the House was Portia Simpson Miller’s (2011–2016), who had declared that Jamaica would finally get its own local queen.

No member of either party would admit it publicly, but they privately point to long-running debate over whether the country should go the way of an executive or ceremonial president.

There’s also the JLP’s insistence on bundling issues such as the Queen’s removal with other matters into a grand referendum yet to materialise.

“It remains my aspiration that we should have fixed election dates,” Holness told The Gleaner last month. “My commitment [is] towards the grand referendum, which would put all the constitutional issues, all the issues that deal with what I call the architecture of our society.”

The party promised to hold consultations with Jamaicans in its 2020 manifesto, a step down from the promise of action in 2016.

A 2020 Gleaner-commissioned Don Anderson poll, with a three per cent margin of error, found that nearly 57 per cent of Jamaicans supported cutting ties with the monarchy and a third opposing it.

Golding argued that this time around, Holness could use his crucial majority in the House to strategically make a serious push.

“Maybe now, with the strength of his majority, he will perhaps be more aggressive in laying out his constitutional-reform programme,” the former prime minister said. “The media and civil society both have a role to play because if there is broad public support for these initiatives and if properly expressed, then that may induce the Opposition to not withhold their support.”

The National Integrity Action (NIA) is also joining the calls for Holness to use the “historic opportunity” to pursue fundamental constitutional and institutional changes “to strengthen transparency, accountability and participation in Jamaican governance”.

“The issue of providing the electorate with the right of recall, a mechanism to hold MPs to account within the five-year election cycle, implemented in Belize, needs to be put back on the agenda,” said Professor Trevor Munroe, the principal director of the NIA, who reiterated support for the term limits, impeachment legislation first proposed two decades ago, and fix elections.

And he is suggesting that Holness give consideration to pushing for the incorporation of the country’s parliamentary commissions, in particular the Electoral Commission and the Integrity Commission, into the Constitution.

“As it stands now, any government with authoritarian tendencies who disapproved of the action of the commissions could simply change the law, by simple majority, to weaken their independence and render them pawns of the government of the day. Placing them in the Constitution would reinforce their independence while holding them accountable to the Parliament,” said Munroe.

And with a lopsided House of Representatives, he said Holness should be proposing three independent senators on the government’s slate, although that’s not constitutionally required.

At 39 years old, Holness became Jamaica’s youngest prime minister in October 2011 after Golding resigned as head of government over his then administration’s handling of the US request to extradite Tivoli Gardens strongman Christopher ‘Dudus’ Coke.

Golding had signalled to the party that Holness, the then education minister, was the “future”, over the likes of other young prospects like Dr Christopher Tufton, a key ally of his from their time in the National Democratic Movement in the 1990s.

Holness suffered a heavy Christmas election defeat but returned in 2016 with a shock victory, and is now set to be sworn in for the third time as prime minister after last Thursday leading the JLP to its first consecutive contested general election win since 1967.

“I did signal when I was stepping down that I believe that the future of the party ought to be placed in the hands of someone from the generation that came after mine,” said Golding, 72. “I perceived that we had got to stage where a large segment of the Jamaican population, which was dominated by young people, had become alienated.

“I didn’t think that anybody of my age or older than me would have been able to re-engage them and I think that in that assessment, I think I was correct. History has proven me to be right,” he told The Sunday Gleaner.

But the trouncing of the PNP, the gutting of its top-tier leadership and severe weakening of prospects in an election with the lowest voter turnout (37%) in contested polls leaves Golding troubled.

“Democracy requires not just a strong, decisive Government; it requires a strong, active Opposition. The PNP is going to have to – and they need to move virtually immediately – embark on a process of rebuilding, which will require serious objective, introspective analysis.”

That process, he said, will take time because “in the Jamaica Labour Party, we have had to do that”.

The former prime minister has a caution for the renewed JLP administration.

“It’s going to be important for them to understand that this is no licence for arrogance; this is no passport to complacency. The stronger the mandate, it is the greater expectation in terms of delivery.”