Did election cause spiralling COVID-19 numbers? 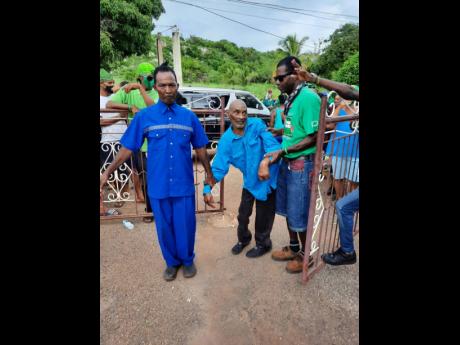 An elderly man said to be in his 90s is gingerly led into a packed polling station without anyone wearing a mask at the Tryall Primary School in South East St Elizabeth.

As the Government prepares to announce stricter public restrictions to curtail the spread of the coronavirus disease 2019 (COVID-19) tomorrow, concerns over whether Prime Minister Andrew Holness erred in having the general election last Thursday – further adding to the spiralling numbers – continue to swirl.

The debate follows revelation by Health and Wellness Minister Dr Christopher Tufton a day after the election that the pandemic had reached the community transmission phase in Jamaica, and that more stringent lockdown measures were now needed. COVID-19 has already killed 30 Jamaicans and has infected close to 3,000.

Tufton said the community spread classification was made based on assessments from the technical team in the health ministry and after consultation with representatives from the Pan American Health Organization on Wednesday.

Yesterday, the news came as no surprise to Dr Alfred Dawes, who has been vocal about controlling the dreaded respiratory illness long before Jamaica’s first case in March.

He said some health professionals believe Jamaica had gone into community transmission of COVID-19 a week ago.

“The truth is that we are now one week late to implement the new measures. Those persons who had become infected a few weeks ago, had we instituted the lockdown measures and restrictions from last week, it would have limited their ability to move around. That would have limited the infection of multiple persons during the run-up to the election and on election day,” charged Dawes, who weeks ago in this newspaper warned of a COVID-19 spike spin-off from the general election, and had even urged the Government to postpone it.

“What we did in holding the election in the middle of a spike in numbers or in the steep part of the long curve is that we allowed persons who got infected in the run-up to and after nomination day to come back out and infect even more people. So we are going to see exponential rise in cases in the next two weeks.”

According to Dawes, who is also medical director at Windsor Wellness Centre and Carivia Medical Limited, “If you discover community spread, the immediate thing to do is to alert the nation that they should consider everybody to be potential carriers of COVID-19. I don’t know if the information was deliberately suppressed, I won’t comment on that, but we suspect that this was happening for some time now because the number of cases under investigation was growing exponentially, coming from a situation where we were saying that cases were linked to a specific cluster or community. Now what is happening is that for the majority of people getting the disease, we don’t know where they picked it up.”

Dawes said this was going to make things worse for the already frightened and overburdened healthcare workers.

The Sunday Gleaner understands that more than a dozen doctors and 10 nurses have reportedly contracted the virus, while several others have gone into quarantine. This further compounds the challenges not only being faced by COVID-19 patients, but persons requiring other urgent medical care in the public health system.

In the meantime, professor of political and social psychology, Dr Christopher Charles, said he had no issue with the prime minister calling the election when he did, and that if blame were to be placed, both party leaders would have to shoulder it.

“It is the prime minister’s legal prerogative to call the election, and he has to balance the issue of public health with the people’s democratic rights. I do not take the position that the election is a major cause for the (COVID-19) spike,” said Charles, listing social disobedience, the opening up of the country’s borders and the flouting of quarantine orders as more serious factors.

He added, “As far as I recall, when the prime minister called the election, the People’s National Party didn’t say ‘oh, you called it, it is your legal prerogative but because it is a bad call because of public health we will put it on record that you shouldn’t have called it in this pandemic.’ It is when the spike got out of control that they started crying out.

“The PNP is also complicit because they said nothing. As a matter of fact, in the election run-up some members were telling Andrew to call it in our culture of excitement. And when the prime minister announced the election date, he was not rebuked by the PNP. So if you are going to focus on the politics, both parties are complicit.”

Days before the September 3 general election, the Government announced a raft of COVID-19 protocols to guide polling station operations and allotted a 4 p.m. to 5 p.m. voting time for COVID-19-positive persons who desired to leave quarantine and isolation facilities to exercise their franchise.

At 4 p.m. on Thursday, however, many of the protocols were all but forgotten at one polling station, as voters pushed and shouted their way maskless into the Tryall Primary School in South East St Elizabeth. Several senior citizens were also hoisted from vehicles without masks or by persons who were not wearing any.

Noting that he was not made aware of the pandemic reaching community spread prior to the election, Director of Elections Glasspole Brown said he could not say how many COVID-19-positive persons turned up to vote during the hour on Thursday.

“We could not know, in the sense that we could not have looked at a person and say that person was COVID-19-positive or not. Everybody who came through during that period of time underwent the necessary protocols of wearing a mask and so on. I really don’t know how we could say who is positive, our protocol was to treat everyone as if they were positive,” Brown told The Sunday Gleaner.