Holness to be sworn in tomorrow 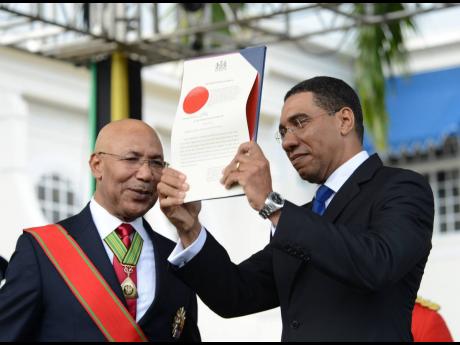 File
File Governor General Sir Patrick Allen looks on as Prime Minister Andrew Holness holds aloft the instrument of appointment at his swearing in ceremony at King’s House on March 3, 2016.

The nation will get a better glimpse of what the next five years will be like when Andrew Holness, 48, is sworn in tomorrow for the third time as prime minister of Jamaica.

Holness’ reappointment will follow formal notification from the Electoral Office of Jamaica (EOJ) to the Governor General Sir Patrick Allen on the final count of ballots from Thursday’s general election and the party that forms the majority in the House of Representatives.

The recount started on Friday.

The preliminary results indicated that the Holness-led JLP has won 49 of the 63-seat chamber; the People’s National Party’s (PNP) escaped with the remaining 14 in a poll that returned the lowest voter turnout (37%) in the history of contested elections.

In 2016, Holness framed his speech in the context of his party having won by one seat.

“This historic election delivered the smallest majority but also the clearest mandate: Fix Government!” he said.

Four years later, in the era of COVID-19, which will severely reduce attendance numbers, Holness is taking the oath of office with one of the largest parliamentary majorities in the House of Representatives.

No location was given in the Office of the Prime Minister media advisory, which said the ceremony is scheduled for 3 p.m.

Meanwhile, JLP General Secretary Dr Horace Chang has said that Holness has not made any decisions yet on the membership of a new Cabinet as he has been tied up with briefings and the coronavirus pandemic.

Chang said an announcement of the executive should come by the end of this week.

The general secretary refused to be drawn on the likely composition, only noting that care has to be taken to ensure that first-time legislators are not saddled with work to prevent them from consolidating their hold of constituencies.

“We have to make sure they don’t get burdened by the bureaucracy of government,” he told The Sunday Gleaner.

Eighteen of the newly elected JLP representatives will be first-time lawmakers.

Floyd Green, one of the party’s rising stars who was returned for a second term as the representative for St Elizabeth South Western, is on course to being a full minister, another very senior party official who wasn’t authorised to speak has told The Sunday Gleaner.

Green is currently a junior minister in the Ministry of Industry, Commerce, Agriculture and Fisheries (MICAF). He previously served in the education ministry, but was shifted by Holness as a corruption scandal engulfed the Ruel Reid-led ministry.

“If we had five or six Floyd Greens, then we would be in a good discussion game,” the official said, pointing out that while the party was deliberate in recruiting ‘bright’, young representatives, many of them lack experience in public administration.

Among the newly elected slate, two names have been floated as major prospects for high office in the executive – Phillip Henriques, the party’s former treasurer who won in Clarendon North Western, and Delroy Slowley from St Elizabeth North Eastern.

Henriques’ antecedents as managing director of Kingston Industrial Agencies, a major supplier of agriculture and industrial equipment, and his several roles in statutory bodies under MICAF, have seen his named hovering over the MICAF portfolio.

But while Henriques is “one of the few mature people we’ve got in and would have a claim”, he would be a strong consideration if MICAF was to be split, the source said.

Slowley, meanwhile, is said to be a “mature businessman” with important experience in administration.

At least four current ministers are expected to keep their portfolios: Kamina Johnson Smith at foreign affairs and foreign trade; Chang at national security; Dr Nigel Clarke at the finance ministry; and Dr Christopher Tufton at health, the official said.

Noting that Holness may embark on a major legislative overhaul, the JLP insider said Marlene Malahoo Forte’s role as attorney general is being reviewed as it may be time to get “fresh perspectives”.

Outside of the prime minister, the Constitution requires a minimum of 11 government ministries, and at least two but no more than four ministers can be drawn from the Senate.

Johnson Smith is a certain pick from the Senate, where she is expected to keep serving.

Holness will also be keenly watched on his inclusion of women. Fourteen of the 18 JLP female candidates won their seats, the most by any one party in electoral history.

And with four from the PNP, nearly a third of the House of Representatives will comprise of women – the record for female representation in Gordon House.

Some other new names being touted for positions in the executive include Robert Morgan, a former parliamentary secretary and close ally of Holness; Tova Hamilton; Marsha Smith; Dr Michelle Charles; and Robert Miller, another Holness confidant.