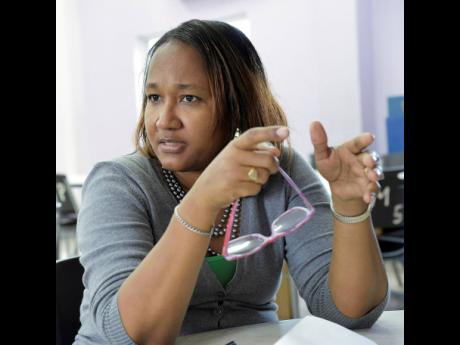 That was the response of Lisa*, a mother of four living in west Kingston, when asked how her family has been coping since the COVID-19 pandemic.

Two of her children are beneficiaries of the Programme of Advancement Through Health and Education (PATH) – a state welfare initiative – and received a free cooked meal at school daily.

While lauding the Government for allocating an additional payment during the period April to June as physical classes were suspended, Lisa said that filling the gap the closure of schools has created is still proving difficult.

Jamaica has been rocked by the COVID-19 pandemic for the last six months, with restrictions put in place to combat the deadly coronavirus pushing many families to the edge.

A cashier at a liquor store, Lisa’s salary has been reduced, owing to the early closure of the business – a domino effect of the nightly curfew. Her weekly pay of $12,000 began to fluctuate in April, but the lowest she has earned is $8,000.

The study also found that 44 per cent of Jamaican families have experienced food shortages, a direct correlation to income loss, which rings true for Lisa.

With sanitisation products and masks now necessities, coupled with an increased water bill, she said grocery shopping has taken a further hit.

Lisa added that the cash flow determines what comprises each meal and how often she cooks per day.

“It’s stressful and I can’t wait for it to be over,” a frustrated Lisa told The Gleaner.

In order to cope with the virus-linked food shortage, most families have entered the lean season by eating smaller or fewer meals per day.

This was felt more acutely in female-headed households and those with two or more children.

“Being the principal of an inner-city primary school, with a population of 1,200 students – about a fifth of that are PATH students – I have no reservations in saying that some of my parents and students are facing these issues,” said Aretha Willie of George Headley Primary School in St Andrew.

More than 130,000 families across the island are registered with PATH.

Willie recalled that the weeks following the closure of school in March, parents were invited to collect excess food from the canteen, and though they did not disclose their personal stories, they were among the most vulnerable.

NO SOURCE OF INCOME

“I’m wondering how practical it is to have online classes when we have hungry children sitting in front of us. They will be away from us; I don’t know how much we can do. Our welfare programme is funded by the canteen, and with schools being closed from March, we have no source of income,” the principal explained.

She explained that some students on the welfare programme were usually given an extra portion in their lunch boxes to assist with dinner, as the poverty level differed among students.

Meanwhile, Michael Reid, a father of 10, with four children attending school, told The Gleaner that he has maintained his children’s school routine in an effort to keep finances under control.

“My job has not been impacted by COVID-19 and I must be grateful for that,” said the contract driver.

The UNICEF-CAPRI survey found that one in 10 respondents was not willing to send their children back to school by September, while 30 per cent were undecided.

Reid expressed concern about the phased reopening of schools scheduled for October.

“If the adults aren’t able to keep the virus under control, how are the kids going to do it?” he questioned.

“It is my opinion that they should delay school until January because the election wave hasn’t come yet,” he added, referencing projections of a spike in COVID-19 cases due to the recent election campaign.

The study also reflected that children in the pre-K/basic-school groups had the lowest engagement with remote learning, followed by high-school and primary-school students.

At the early-childhood level, facilities were lacking, while in high schools, the primary reasons for low participation was not having a suitable device and lacking Internet access.

Willie shared that an internal survey was done among 700 students and parents last week, which revealed that while students who did not own devices had access to one, Internet connectivity remained a challenge.

With the climbing COVID-19 cases, she said students may not return to school physically until January.