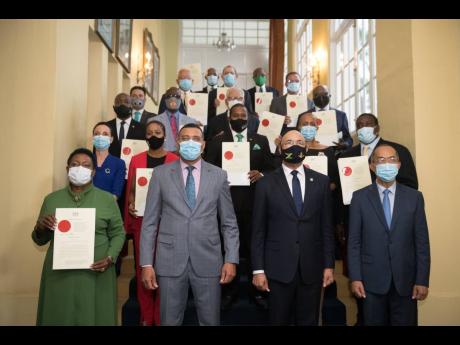 Prime Minister Andrew Holness issued a thinly veiled warning to the newly appointed Cabinet ministers as he admitted that it was not an easy feat for him to assemble the chief architect of policy for his new administration.

The advice appeared to be a pre-emptive strike to prevent a repeat of the scandals that dogged his erstwhile Cabinet in its four-and-a-half-year term.

Fourteen Cabinet members were sworn in by the governor general at King’s House on Sunday to complete the 19-member body. Three members of the Senate form part of the Cabinet.

Holness said he shared with the members of the Cabinet last Friday that his posture was not triumphal, even with a more than two-thirds majority.

“I did not feel the thrill of victory having, of course, experienced the agony of defeat before. I expressed to them that I was very pensive because the character of men will be tested, and we will know them especially now with a large majority,” Holness asserted.

Holness contended that he now has an even more difficult job to ensure that his Cabinet stays in line with the expectations of the people.

“Something new and powerful can happen in our country by our actions if we decide, as ministers, to exercise the power and authority vested in you by these instruments with the highest level of integrity, dignity, and efficiency,” Holness charged.

“Something good can happen in our nation. But it depends on what we choose to do before the electorate chooses to do what they must,” Holness added.

Several of the ministers reappointed to the executive were embroiled in controversy in the last administration.

Among them is Daryl Vaz, who has been tasked with the energy, science, and technology portfolio. But in the previous term, Vaz was accused in a contractor general’s report of interference in a multibillion-dollar hotel and land purchase that was deemed a giveaway. He was stripped of the land and environment portfolio in June 2020 after it emerged that he had tried to purchase a slice of protected lands to build a private cabin.

Vaz denied impropriety in both cases.

J.C. Hutchinson, now a state minister, was demoted in the summer after he influenced the handover of state farmlands to a company in which his live-in partner had a directorship.

The prime minister said he had been paying attention to public opinion on the Cabinet he has appointed and understood the concern of the public over some of his appointments.

“Is it competence in a subject area, or is it good judgement to administer the affairs of the public? To be able to filter good advice from bad advice? To find the right people to be advisers?” said Holness, who emphasised what he believed constituted “the essence of ministerial responsibility”.

“It is knowledge of the subject or integrity of the character of the person that the discretion and power of the minister will always be used in the public’s interest and not for personal interest.”

The last Holness administration was riddled with corruption scandals, with two ministers forced to leave the Cabinet amid swirling allegations.

Though Wheatley has been widely criticised, he has not been accused of benefiting from any scandal. The former minister has denied an Integrity Commission report accusing him of dishonesty.