‘I get results’ - Vaz hits back at critics over Cabinet appointment 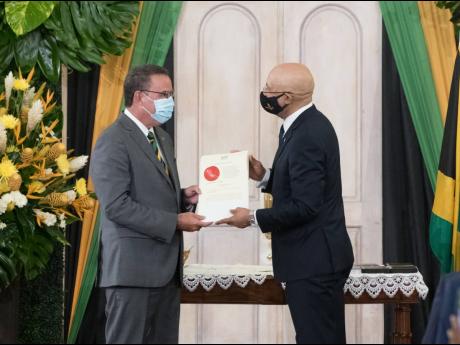 A feisty Daryl Vaz has shot back at critics who have questioned his appointment as minister of science, energy, and technology.

Vaz, who is not completely new to the role, having served as minister of telecommunications and information in the Bruce Golding administration, told The Gleaner that he was ready for the task ahead.

“I have a very simple saying: ‘Don’t listen to the noise in the market, watch the sales.’ Watch the sales. In this case, the sales is the performance,” Vaz told The Gleaner after Sunday’s swearing-in ceremony held at King’s House.

“Regardless of what has been said about me, orchestrated or not, there is one thing that is indisputable: the energy that I bring to the job, the fact that that I get results anywhere I go.”

Among Vaz’s top priorities are addressing the vexed issue of poor telecommunications services experienced by customers and the constant complaint of high electricity bills directed at the Jamaica Public Service Company.

“Then, of course, we have the whole issue of the digitisation, which is a big priority for this administration. What is most important, based on the inherited situation and the perception, as it relates to the ministry and the agencies, is to come with a sound board of people who are competent and well-respected in the industries across Jamaica,” Vaz, the Portland Western member of parliament, said.

On the issue of the scandal-hit Petrojam, Vaz said he will address any unresolved issues as soon as he gets clear policy directives from Cabinet.

“I am here to work, and I am here to ensure that I take the confidence that has been invested in me by the prime minister and by the Cabinet,” Vaz said.