Davis homing in on rural revival 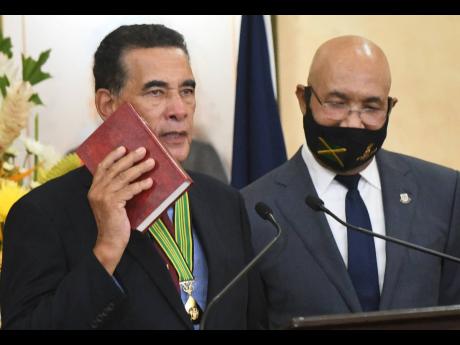 Rudolph Brown/Photographer
Homer Davis taking the oath of office alongside Sir Patrick Allen, the governor general, at a swearing-in ceremony at King’s House on Monday.

Davis, the member of parliament-elect for the farming-dependent St James Southern constituency, told The Gleaner that it would take a significant budget and much time to turn back the clock on developmentally starved communities.

“Over the years, our rural townships have suffered and their development blighted and stagnated because of urban drift. We intend to cause a reversal, where we make rural Jamaica once again a place to live, raise families, and enjoy one’s days,” said Davis, who was among eight others to be sworn in as state ministers at King’s House on Monday.

Davis, who will work with Local Government and Rural Development Minister Desmond McKenzie, lamented that too many rural districts and towns were “run-down and inhospitable for the lack of investment”.

“In the past, no attention was paid to try and revitalise these communities and so, with this portfolio addition to local government, it will now afford us to look at how we can put in place the necessary infrastructure to attract some of those persons who had left these communities,” the state minister said.

Davis, the former mayor of Montego Bay, said that the ministry’s mandate would centre on improved garbage collection, increased supply of piped water, and “comprehensive access to the Internet and electricity”.

Addressing the matter of rural drift, Keith Duncan, president of the Private Sector Organisation of Jamaica (PSOJ), said there were a few imperatives that needed to be executed right away.

These include broadband/Internet penetration to enhance access for schooling, global services, and work-from-home opportunities in the COVID-19 era.

Duncan said that developing rural Jamaica would have to include jobs in non-traditional areas such as animation and software development. Agriculture, he said, was still key to the development agenda in the countryside.

“It is important that we encourage profitable farming opportunities by making water available with good irrigation and storage capacities to offset droughts in the dry season,” the PSOJ head said.

Meanwhile, Dr Donovan Stanberry, former permanent secretary in the Ministry of Industry, Commerce, Agriculture and Fisheries, has urged the new administration to make rural development a major plank of its growth strategy.

He told The Gleaner that far too much rural farmland had been abandoned instead of being used to buttress the nation’s food security.

Stanberry, who is now registrar at The University of the West Indies, said that Government should take deliberate steps in returning vibrancy to rural communities as urban neighbourhoods buckled under the strain of overstretched infrastructure.

“The extension of the road network and the upgrade in some cases of mainly farm roads is important,” Stanberry said.

“This is a good mix of youth and experience and they will add great support to the members of the Cabinet in the development and execution of policy in the administration of public affairs,” Holness said.