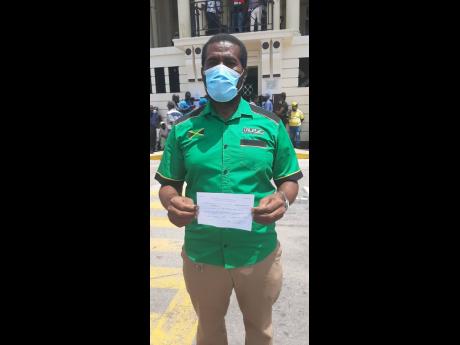 Photos by Albert Ferguson
Daniel Lawrence holding up a copy of the declaration of poll from the Electoral Office of Jamaica declaring him the winner of the September 3 general election.

After emerging as the member of parliament-elect in a nail-biting magisterial recount for Westmoreland Eastern, Daniel Lawrence vowed on Tuesday to rebuild public trust by addressing long-standing infrastructural blight.

He pledged to “get this run-down constituency back together” after triumphing over the PNP’s Luther Buchanan in a recount that was presided over by Parish Judge Steve Walters.

“I don’t see it (Westmoreland Eastern) as a People’s National Party territory. I just see it as a seat that the PNP continues to win over the years, because maybe they didn’t have a representative like me who the people develop their trust in,” said a confident Lawrence.

He said that his 11-vote victory margin over the incumbent was evidence of wider disaffection in the parish.

“This is a well-deserved victory. The people of Westmoreland were crying out for it and they got it through me and I will deliver,” Lawrence told The Gleaner.

The seat had been awarded to Buchanan in the final count when the returning officer broke the 4,834-all deadlock by casting the deciding vote after a lucky draw.

Following Tuesday’s magisterial declaration, Buchanan congratulated Lawrence with a handshake in the courtroom but indicated that he was not in the mood to talk to the media.

“You didn’t want to talk to me while I was leading,” Buchanan said as he walked away towards his vehicle.

The PNP has been the custodian of Westmoreland Eastern, which was originally called Westmoreland Southern, in 1993 when it was first contested. It was consistently won by then Prime Minister P.J. Patterson.

Buchanan, a former PNP deputy general secretary, was first elected member of parliament for the constituency in 2006 in a by-election following Patterson’s retirement from representational politics.

O’Neil Brown, lead attorney for Lawrence, said that his team had no doubt that they would have emerged victorious.

“The essence of our strategy has always been to focus on the rejected ballots. When we did our analysis, we knew that a plurality of the votes was there for us because we paid particular attention to the ballots that had been rejected,” Brown said.

In court Tuesday, Lawrence lost one vote that was marked with a tick, rather than a cross or an X, but managed to finish with 28 of the 107 previously rejected ballots by the Electoral Office of Jamaica. Buchanan tallied 17 and MiKa’el one. The others were ruled as properly disposed of by the court.

From the last 10 boxes counted, Lawrence finished 319 votes behind Buchanan, with 598, but came back to win the seat by a margin of 11 votes – the identical number he received from the last box counted in polling division 115. Twenty-one spoilt ballots were accounted for in the four-day magisterial recount.