‘How much longer must we suffer?’ - Anger at NHT as MoBay home turns flood zone 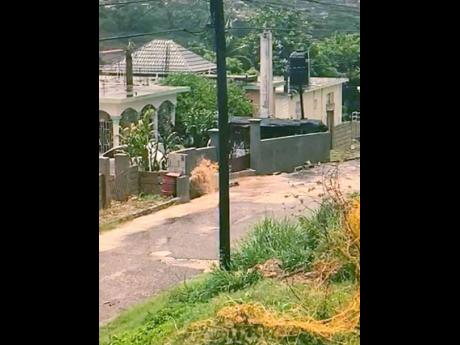 Contributed
This Rosemount Gardens home in Montego Bay has been a flood casualty for 20 years. The owners said that the National Housing Trust has not fulfilled promises to intervene.

Joan and Elvis Clarke have inherited “a mini Dunn’s River Falls”, which has literally claimed ownership of their home. It only has to rain for 20 minutes for their Rosemount Gardens home to be flooded out.

Their ordeal can be traced back to 20 years ago when flood waters and debris from the nearby Rose Heights community turned their yard into a river course.

A drain that should have channelled water away from their home has been wreaking havoc, causing immense pain and discomfort. Since 2011, a promise by the state-run National Housing Trust (NHT) to divert the water has not been upheld.

The Clarkes secured the land through an NHT mortgage in 2000 via a special programme the Government introduced for homeowners.

“For 20 years we have been trying to get some sort of recourse from the NHT. From the time we were given the land, the rainwater toppled the work shed being used by the construction team,” said the frustrated retiree seemingly at her wits’ end.

At the time, the couple say the NHT had a take-it-or-leave-it attitude. However, hungry to have their own home, they said they were not dissuaded.

Today, Mrs Clarke says she is overwhelmed with sorrow.

“I feel like they have stripped me of my dignity. I have to put building blocks at my gate when I am going out, and remove them when I come in. We lock ourselves out and block ourselves in with eight blocks,” she lamented.

Their most frightening experience to date was the 2017 flood that ravaged downtown Montego Bay, damaging several cars and stores in its path.

“Our garage, master bedroom, living area, kitchen, veranda and back door suffered a similar fate as the businesses in downtown Montego Bay,” said Mrs Clarke, adding that it took her days to clean up.

With depleted funds, the Clarkes were forced to retile their home and repaint the areas stripped by the water, even while living in fear that their home could not possibly withstand another shower.

The couple said that the NHT originally told them it didn’t have the money to change the direction of the drain. When funding became available, the NHT said that the work was awaiting tendering.

Nine years of waiting and up to August 24, 2020, NHT Project Manager Michael Taylor, in an email seen by The Gleaner, promised yet again.

This time, he advised: “Tenders for the works were still being evaluated, and we anticipate that the related works won’t be starting until about December 2020, as the approval of the Cabinet is required,” Taylor said.

Letters addressed to the Clarkes in 2013, 2014, 2015, and 2018 by Taylor had similar commitments. The couple was asked to wait for six months, which turned into a year, and now seven years.

Mrs Clarke has one lingering question: “How much longer must we suffer the indignity of rushing home when the rain sets in or lifting blocks every time to alleviate flooding or cleaning up as I just did after a downfall of rain?”

The situation has become so unbearable, residents in the area shared videos of the last flooding of the Clarkes’ home with The Gleaner.

“After 20 minutes of rain, you can be sure the water will run into their home,” neighbour Sharon Earle said.

The numerous complaints have resulted in teams of NHT engineers visiting the property to investigate, said Mrs Clarke.

The couple said they added more height to their wall at the main entrance where the water empties into the drain on the roadway, but after that the water went straight into their home.

“At one time we blocked off the main entrance so the water was not coming in through the garage into the house, but then we realised it was eating at the foundation, so we blocked that area, which was the best of both evils,” Mrs Clarke explained.

President of the Rosemount Gardens Citizens Association, Berle Hylton, said the situation has worsened over the years, calling it “a mini Dunn’s River Falls”.

“It gets very high, operating like a fountain. The drains are too narrow and the water cannot hold in them,” he said.