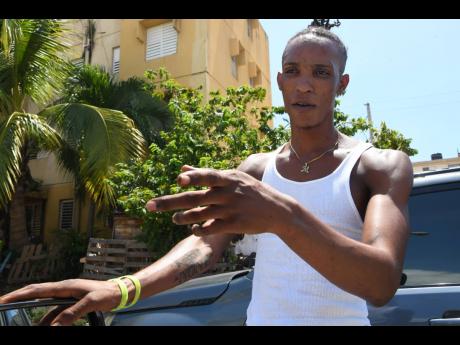 Rudolph Brown/Photographer
Daniel Beckford, of Denham Town, Kingston, says he was unfairly detained for weeks, which cost him his job.

Daniel Beckford said that he was hanging out with his brother and mutual friends, enjoying music outside his home in Golden Heights, Denham Town, on May 17 when the security forces allegedly detained them in a swoop and transferred them to a zone of special operations base in the community.

Beckford, 21, said none of the young men knew what was in store for them, but he anticipated a swift release after being processed.

That optimism evaporated after what he recounted as a chance event turned into more than a month’s detention, during which he was transferred to holding cells in different police jurisdictions.

“A over deh mi end up get mi Sunday dinner,” Beckford claimed.

Denham Town, which is located in the Kingston Western Police Division, was not under a state of emergency on that fateful Sunday when Beckford, his brother, and friends were scooped up the police. Emergency powers were imposed there on June 14.

Beckford alleged that he was whisked away to a lock-up in Bull Bay, in the Kingston Eastern Police Division, which had been placed under an SOE almost four months earlier, on January 26. There, he experienced difficulty explaining to his family where he was being held and said he was constantly moved from jail to jail.

Beckford’s account, which has not been independently corroborated, is a narrative oft told of Jamaica’s policing strategy in using SOEs to hold suspects and others for long periods during ongoing investigations. The police have often argued that probes cannot be effectively undertaken unless strongmen whose presence and influence elicit fear are removed from their communities.

But there is a counternarrative: of police and soldiers who arbitrarily detain mostly poor black men as an easier tactic than intelligence-driven investigations and iron-clad cases.

Beckford’s account is part of an unravelling thread of detentions under SOEs, which triggered a landmark Supreme Court ruling last Friday.

Justice Bertram Morrison ruled that the detention of five men under SOEs – who were held between 177 and 431 days without charge – were unconstitutional, breached the doctrine of the separation of powers, and was an “egregious” overreach of the power of the executive.

“Dem did a hide mi from mi family,” he said, alleging police abuse.

He later faced an identification parade at the Kingston Central Police Station before being released, he said.

But according to the 21-year-old, he lost his construction job after trying to explain his more than monthlong absence to the foreman. He blames the ‘system’ – Jamaican parlance for an oppressive State – as the reason he’s been without a steady job till now.

“Every day mi jus deh yah sidung. All now, mi woulda deh a work. Nowdays when dem come round and see mi, dem waaa seh you a idler when a dem cause everything,” Beckford said of the police.