Floodwaters gobbled her yard; the house could be next 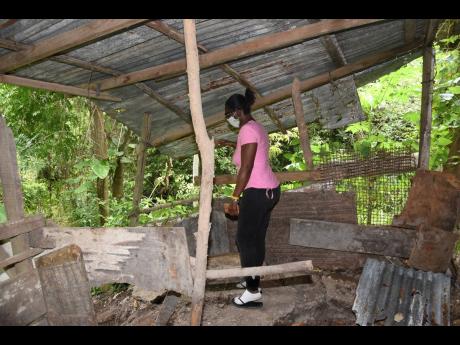 Kenyon Hemans/Photographer
Juliet Clarke rescued her chickens just in time before her coop was badly damaged in the deluge. 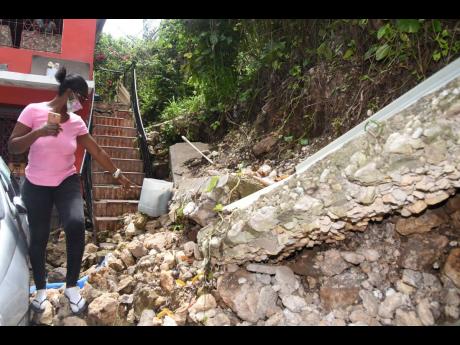 Kenyon Hemans/Photographer
Juliet Clarke of Lindo’s Gap in rural St Andrew points to her retaining wall that collapsed after water from the main road eroded her land, resulting in the destruction of the wall and damaging the stairway of her two-storey house. 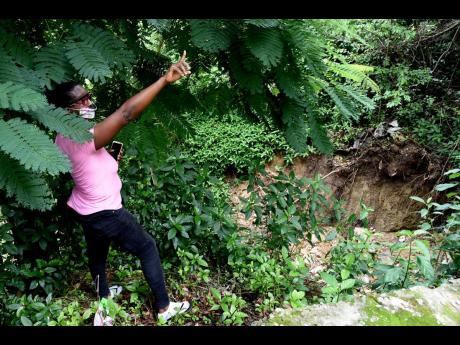 Kenyon Hemans/Photographer
A landslide claimed much of Juliet Clarke’s backyard after floodwaters rushed from the main road on to her property. 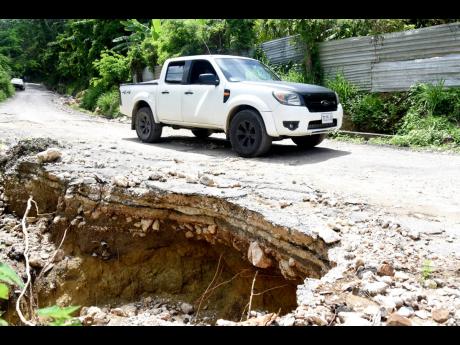 Kenyon Hemans/Photographer
Residents of Lindo’s Gap in rural St Andrew are calling on Member of Parliament Juliet Holness and other state authorities to assist in repairing the main road after heavy rains destroyed sections of the thoroughfare.
1
2
3
4

When floodwaters inundated Juliet Clarke’s home in east rural St Andrew last month, they swallowed a chunk of the backyard, her livelihood, and her peace of mind.

The Lower Halls Delight resident said that heavy rains on August 18 flooded the lower half of her two-storey house, cracked her stairs, damaged her husband’s car, and terrified her household, which includes five children.

“Water literally ran through downstairs of the house; that is something that I’ve never seen in all of my life,” she said, moments after showing the Gleaner team massive infrastructural damage to her land.

A culvert is located towards the back of the property she has occupied for the last 18 years. With not many options available for water to drain from the roadway, Clarke has to watch helplessly whenever it rains, knowing that the water is going to claim more of her yard.

The last heavy downpour swept away her chicken coop and caused her sleepless nights.

“That was my main income. I cannot do it now because I don’t have a pen; the pen is gone,” she said, before sharing her worst fear. “If we have a next shower of rain like that, the house might just go down, too.”

Both Clarke and her brother, Howard Swaby, have made contact with councillor for the area, Kelvin Clarke, who has visited the disaster site. To date, nothing has been done to remedy the problem.

“Even last week, I sent the councillor a text pertaining to the whole matter,” said Swaby.

“No progress has actually been made. On Saturday when it rained again, another section of the land actually moved away,” he said.

Mrs Clarke has since penned a letter to the National Works Agency (NWA) through her attorney and has been promised a visit, which has not yet materialised.

Kelvin Clarke has, however, assured that the NWA is doing a general assessment of the entire stretch of deteriorating roadway leading from Lower Halls Delight. He disclosed that the remedial work would have to be more than a simple patch job “because of how the water behaves”.

“You have water coming from different sections that actually start to tear the infrastructure; that is something that needs a comprehensive overhaul,” he told The Gleaner.

“... It pains my heart,” he said, in reference to the damage caused to Clarke’s property.

The councillor, who also resides in the community, said the rapid construction of houses in the community over the last few years has made it necessary to develop more drains. The NWA team, which he said was in the area at least two weeks ago, will now have to design proper drainage facilities to prevent excess water from going through the backyards of residents like Clarke.

Loris Lambert, who lives in Lindo’s Gap, cannot recall ever seeing the road in “a good condition”, but said the current state is the worst she has ever seen it.

While there are no signs indicating danger ahead, motorists can expect a very bumpy and dangerous ride while traversing the roadway.

“The rain that fall make some manhole that can bury me and you in it,” she quipped lightheartedly as she waited for one of the seemingly few taxis that still brave the stretch of road daily.

“The majority of the people them don’t want any water through their place, so they block the drain and put the excess force of the water on the road and it damage the road,” she explained.

Living in the community has proven to be very costly for Stephenne Walker.

“Is like every other month I have to change the front end of my car, because of the road condition,” she told The Gleaner.

Most motorists who travel to Lindo’s Gap live there, which means they are used to navigating the treacherous surface. But accidents do happen.

“You have to be moving from one side of the road to the other side; and by the time you go on the other side, is a car coming,” lamented Walker, whose car was hit by a truck recently as the driver tried to avoid a pothole.