‘She was always careful’ - Relatives, colleagues puzzled as to how late KC vice-principal contracted COVID-19 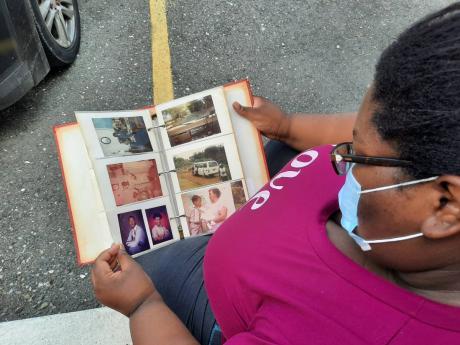 Photo by Corey Robinson
Kara Edwards looks through a photo album as she reflects on the life and times of her late mother, Juliet Wilson, the Kingston College vice-principal who passed away last week. 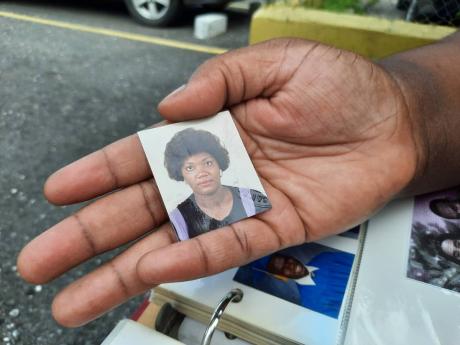 Kara Edwards sat outside her New Kingston apartment leafing through a photo album of her late mother, Juliet Wilson, vice-principal of Kingston College (KC) and one of at least 88 Jamaicans who lost their lives to COVID-19.

With every turn and ruffle, the aged pages peeled away at what to many appeared a stern exterior, revealing a soft, caring soul who espoused tough love over mediocrity from students and friends alike.

Now alone, her lifelong companion snatched from under their roof, Kara, 32, last Thursday fought back whatever tears were left from nights of crying by herself in quarantine during her mother’s hospitalisation and death.

Wilson, who taught at the all-boys’ school for 25 years and who was has served as a vice-principal since 2007, died last Sunday at the University Hospital of the West Indies after being admitted on September 9.

She suffered a multiplicity of health complications, including lung, nerve, and kidney issues, and ominously warned relatives and friends that catching the dreaded disease would be her death knell.

Now, her only child is living those fears.

There will be no more greetings at the front door nor any more strokes on Kara’s foot – the usual greeting from her mother as she passed her room on nightly bathroom runs.

“Mommy was always afraid of the hospital. She always had a fear of going into the hospital and not coming out, and so she always took precautions ... always careful not to let anyone near her,” Kara told The Sunday Gleaner.

“Now that fear has come true, and I really feel it for her. She cried when she was being admitted; and I never saw Mommy again from that day,” said Kara, the sound from the flipping pages slowing.

“Most people would not see this about Mommy, but on the inside, she was very soft,” Kara confided, pausing at one page bearing photos of Wilson laughing with relatives, posing proudly with KC students, and another with the late Governor General Sir Howard Cooke, who Kara said was one of her mother’s good friends.

“I won’t ever see her again. They (the funeral home) are saying it doesn’t make any sense I even send any clothes. They can’t touch her body. They just have to wrap it up tight and put it in the casket,” shrugged Kara, who, for the last month, has only ventured outside her house to empty garbage with a face mask tightly fit.

A day after the September 3 general election, the Government announced that the nation had entered the community spread phase of the pandemic. This means health officials can no longer track the spread of the coronavirus from person to person. At least 5,854 persons have contracted the virus locally, with 4,03 active cases up to Friday, the health ministry has said.

It also means Kara or Wilson’s other relatives and friends may never get the answer to their most baffling question: How did Juliet Wilson, who was keen on safety measures, contract the virus? Some loved ones are even wondering whether she got it while admitted to hospital.

“She was a prudent soul, who cared deeply for her boys and loved quiz. Her involvement with the team is immeasurable,” offered Ricardo Loney, past student and head coach of the KC quiz team. “Her loss is really sad.”

Wilson and Betty-Ann Cummings, manager of KC’s bookshop, were very close friends and would spend evenings meeting and chatting with Principal Dave Myrie, even after physical classes were suspended earlier this year.

Neither Cummings nor Myrie has contracted the virus and both were still befuddled as to how and when their friend and colleague got it when The Sunday Gleaner caught up with them last week.

“The last time I saw her, she said that she wasn’t feeling so good, she wasn’t sick. She wasn’t coughing. Because she was always careful. If she is coming out of her office and someone is on the corridor, she always said, ‘Move, move, move. I’m going into the bathroom. I don’t want catch COVID’!” said Cummings. “I call her ‘Jil Bread’, and you know how she very dramatic already.

“I don’t understand how Juliet caught COVID. They said that it is COVID ... but everybody is wondering. We don’t know. I just don’t know because she was so careful,” said Cummings, who described her close friend as a tireless worker dedicated to her students.

Myrie described Wilson as a vice-principal that every principal would love to have.

“She was an absolute high-class administrator and a friend. She anticipates things and gets them done. She is not somebody to walk away from something. She virtually lived for KC,” he said.

“When the results [of the Caribbean Examinations Council-administered tests] came out yesterday, I just shook my head because I know immediately, Jules and I would have been talking. She would be crunching the data and telling me the percentages and averages of the boys. Every function that happens at the school, Juliet was involved.

“If you look at Jules, you would think that this lady is hard, but a softer soul you could not find,” he said, adding that on many occasions, she would secretly beg for misbehaving boys she herself had recommended for disciplinary action. “None of us just can’t come to terms with how this happened.”

In the meantime, all the school community can do, he said, is to lend support to the family, and Kara said that support has been indefatigable and appreciated for the past week. As she plans her mother’s funeral with relatives, she dreads the final farewell.

“The only thing that I am thinking about now is how I am going to react when I see them lowering her in the ground because I can tell you, it is going to lick really hot,” she sighed.