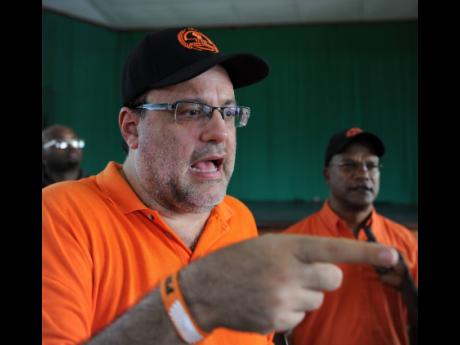 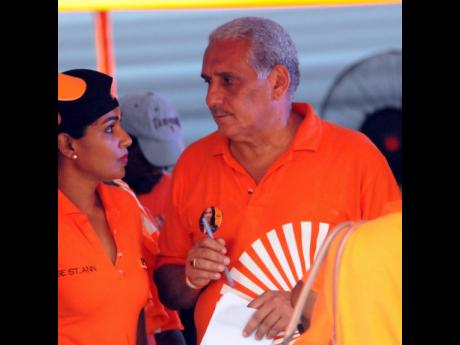 File
Richard Lake speaks with partner Lisa Hanna in an internal election on September 17, 2016. The couple has since got married.
1
2

What is emerging as a titanic clash between the People’s National Party’s (PNP) Lisa Hanna and Mark Golding could churn out record election spending as both candidates are likely to court deep-pocketed financial backers in an imminent internal run-off.

The party’s National Executive Council (NEC) is expected to establish a monitoring committee by the end of this week that will determine a spending cap as the two presidential hopefuls gear up to contest the November 7 poll.

Hanna, the member of parliament for St Ann South Eastern, and Golding, who represents St Andrew Southern, formally declared their candidacy on Sunday, three weeks after Dr Peter Phillips, party president and opposition leader, announced that he would demit office after the PNP’s landslide loss in the September 3 general election.

Donor funding will prove crucial in leveraging support among the PNP’s disparate group structure – even more so with a proposal on the table to have the delegates vote in parishes in deference to coronavirus safety laws banning the traditional mass gathering in Kingston.

But beyond mobilisation, Jamaica’s political tradition, spanning both the PNP and the ruling Jamaica Labour Party, offers overwhelming charity to supporters. That might include above-board expenditure but also incorporate all-out bribery.

Last year’s presidential run-off between Phillips and Peter Bunting had raised the spectre of vote-buying between the One PNP and Rise United camps, with both factions trading accusations.

Hanna, communications director for the Phillips-led One PNP team, told reporters on September 3, 2019, that a “senior leader” of the Risers had been seen soliciting votes, at $10,000 a pop, from delegates in her constituency.

“Every time he went to a delegate and left the envelope, I was called. They are all over the place,” Hanna claimed then.

She did not name the presumed offender.

Former PNP General Secretary Paul Burke is far from confident that the party will be able to sanction those guilty of exceeding any agreed spending cap.

“The leadership of the party has not shown in the past that they have the courage to address that issue,” Burke candidly said on Monday.

PNP Chairman Fitz Jackson said that there was value to imposing a spending limit but declined to pronounce on the prospective cap. According to his recollection, the 2019 presidential race cap was $15 million for each candidate.

The party’s concern about the unseemly influence of money in national elections extended equally forcefully to internal run-offs, said Jackson, who, along with General Secretary Julian Robinson, is set to step down after the first NEC meeting following the November 7 election. That meeting is slated for November 15.

The NEC is the second-highest decision-making body of the party, outside of its annual conference.

“When money is spent, in any, I dare say, reckless way, it undermines the democratic process, within the party and within the country at large, so yes, it is a concern for us. Not only just the spending of money, but also the manner in which it is used,” Jackson said.

In addition to determining the amount, the monitoring committee is also expected to establish penalties for breaches.

“I’m not going to suggest that whatever mechanism we put in place is going to be foolproof, but we are going to do the best we can,” Jackson said.

Both Hanna and Golding have ready access to personal wealth.

Golding had backed Bunting in his failed bid to unseat Phillips a year ago.

Robinson did not wish to comment on the role money could play in the presidential race, except to assure that by the end of this week, the body tasked with determining the spending limit would be in place.

“There is an election monitoring committee that will have to deliberate and make a decision on that, but I don’t want to say any more until that committee has looked at that issue and made a decision,” he said.