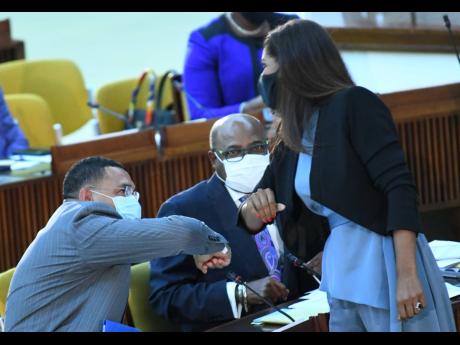 Rudolph Brown/Photographer
Lisa Hanna, member of parliament for St Ann South Eastern, greets Prime Minister Andrew Holness after being sworn in during a sitting of the House of Representatives at the Jamaica Conference Centre in Kingston on Tuesday.

If the legislative process moves apace, Jamaica could have a new National Identification and Registration Act by year end.

The Government is taking steps to have the bill tabled in Parliament by November and placed before a joint select committee for deliberations.

Prime Minister Andrew Holness, in a statement to Parliament on Tuesday, said that a National Identification System (NIDS) Policy Committee, along with the Legislation Committee, which is a subcommittee of Cabinet, will first review the bill before its tabling in Parliament.

He is expecting that review process to be completed by the end of October.

The prime minister said that once the bill is tabled in Parliament, a joint select committee would be established “to navigate the deliberations to arrive at a satisfactory National Identification and Registration Bill”.

Unlike the National Identification and Registration Act 2017, which was struck down as unconstitutional by the Supreme Court after a challenge by Member of Parliament Julian Robinson, the new bill will be placed before a joint select committee to give the public an opportunity to comment on the proposed statute.

Holness sought to assure Jamaicans that the new bill would be properly ventilated, noting that he was fully cognisant of, and sensitive to, the legitimate concerns that persons have regarding data protection and privacy.

He said that the Government was committed to putting in place the legislative, technological, and independent oversight mechanisms to ensure that the rights of persons are respected and protected.

“The Government will also provide an online forum on NIDSFACTS.COM for all Jamaicans to comment on the Bill,” the prime minister said.

In his remarks, Opposition Leader Dr Peter Phillips said that the parliamentary Opposition was never opposed to NIDS in principle. However, he said that the matter was brought to court because of “issues of excessive intrusion in securing biometric data”.

Phillips said he was pleased that the prime minister had given the commitment that the new legislation would be referred to a joint select committee for review.