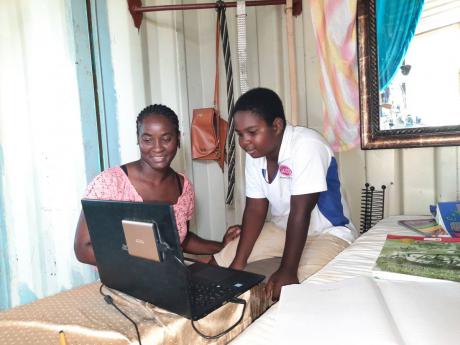 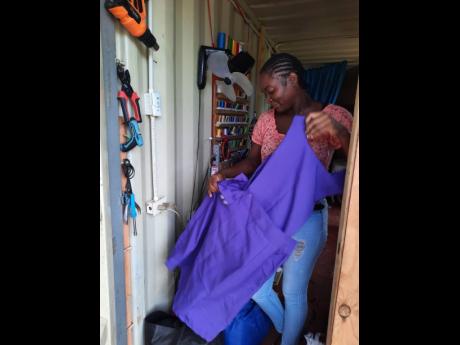 Photo by Corey Robinson
Nathalie Jordan displays uncollected school uniforms left at her shop by parents as schools open online tomorrow. She explained that business has been slow this year as not all schools require that students wear uniforms during online classes.
1
2

Ten-year-old Jayden Blair sat in a corner of his humble shipping container home in St Elizabeth, listening intently beyond the squeaks and static that sometimes accompanied his teacher’s voice during online classes last Tuesday.

Lurching forward with an impatient frown, the youngster tried not to miss a sentence as cars and then motorcycles belched past metres away on the Goshen main road, a major thoroughfare through the ‘breadbasket parish’.

For the past few weeks, this has been the set-up for Jayden as his mother, Nathalie Jordan, a dressmaker, tries her hardest to keep her only child up to date with private online lessons over the summer. That task has been made particularly difficult as COVID-19 has put a damper on her usual back-to-school uniform contracts, leaving her with many uncollected pieces.

Come tomorrow, the stuffy 40-foot container, which already serves as a bedroom, dressmaking shop, and living room, will officially take on its added purpose as a classroom. And although it’s not much for comfort, Jayden’s situation is luxury compared to other students who tomorrow will hunt Wi-Fi hotspots on the street sides and at friends’ homes, sometimes unsupervised as parents juggle jobs to make ends meet.

Without electricity for years

For starters, Jayden has electricity, much more than 10-year-old Brianna of Pepper Primary School can say. Just metres away on Bennett Street, also in Goshen, her house has been without electricity for years. So, too, are sections of the deep-rural Mitcham district, where Internet connectivity is a laughable – if not depressing – subject matter for many parents.

For many, even where Internet connections are available, the slow speed and unstable service pose additional challenges.

“We are in the middle. So persons at the two ends of the road have electricity, but not us. We have written several letters to JPS (Jamaica Public Service Company), but the last response we got from them was that we needed at least 25 houses in the lane for them to come and connect us,” explained Brianna’s mother, Fiona Williams*, deflated that there are only five houses in her neck of the woods.

“We have spoken to several MPs (members of parliament) and councillors about it, but to me, JPS is the problem,” she charged.

Fiona, like many parents interviewed, has been sceptical about the efficiency of the proposed online school set up by the Government.

“She (Brianna) doesn’t have electricity or Internet connection at home. She has to come around to the shop to get a signal or do her work on my phone. That’s why I have to have the data on my phone up and running. Other than that, I don’t know what school up to, so Monday (tomorrow) morning, I am going over there to ask,” added the mother matter-of-factly.

Rupert Williams of Mitcham district is dreading the fate of his teenage son. Cell-phone signal in his community is non-existent, let alone the Internet, he said.

“In the community of George’s Valley, St Elizabeth –which is a rural community – and other surrounding communities, there are over 70 students that are going to be highly disadvantaged at the October 5 start of the school year,” reasoned educator Dwight Brooks.

“Where will the money come from to buy credit daily for their children? And even if they consider to install an Internet connection at their homes, where will they find the hefty installation fee or the monthly payment?” he argued.

In Clarendon, Otis James, who heads the charity organisation James and Friends Foundation, relayed similar concerns and has seen more than 200 impoverished children financed through the programme.

“I doubt if 20 of my youths dem have computers, and you have some children up at Farm and Bucknor and dem place there, not even electricity them have, so I don’t know how dem going to use the Internet. But I still have to try source some laptops for the youth dem, but right now, they are so expensive,” he explained.

“The Government said they are issuing tablets to children on PATH, but what happens to the children whose mother dead, father dead because of violence in Clarendon, and because of that they don’t get to attend school enough days to qualify for the PATH?” James asked. “A lot of them walk miles to go to school and because dem absent a lot of days they get kicked off the list. What happens to them?”

PATH – the Programme of Advancement Through Health and Education – is a state welfare programme which requires needy students to maintain at least 85 per cent attendance at schools to receive benefits.

The Andrew Holness administration has been scrambling to put measures in place to facilitate the delayed reopening of school as the death and infection numbers from the COVID-19 pandemic climb locally.

Remaining safe at home, primary and secondary students are to benefit from a raft of educational interventions online, on television, and from the delivery of printed materials to their homes, particularly in rural areas.

Addressing the sitting of the House of Representatives, Education Minister Fayval Williams said some 190,352 students and 15,466 teachers have already signed on and are using the Government’s online learning management system; and that this represents roughly 32 per cent of students across primary, secondary, and tertiary institutions.

Additionally, some 20,000 teachers have already been trained as part of the Government’s learning management system; and it follows the provision of learning kits, textbooks, worksheets, rental books, and electronic apps, which are slated to cost the Government approximately $626 million for the primary and $200 million for the secondary level for the 2020-2021 academic year.

Williams also said the Government would spend $1.7 billion to provide tablets and laptops for primary- and secondary-school students, mainly those on PATH. For 36,000 other needy students who are not on PATH, $20,000 vouchers will be made available towards the purchase of laptops.

“We are also training our special-needs teachers and those in the private schools,” said Williams, this statement an irritation for Patricia Smith, a resident of Portmore in St Catherine, and who has been struggling with her 11-year-old son since March. The boy is in grade five but functions at the grade-one level.

“I have to go to work. There is no one at home to stay with him and my son just cannot do online work on his own. He cannot manage and there is no way I can stop from work and help him. I won’t be able to pay my mortgage,” said the mother, adding that she has been trying her hardest to employ someone to teach him at home. That is another $3,500 for four hours’ service, and Smith said as it is, she can only afford those payments three days a week. “I can’t afford the five days.”

In May, the Government announced a partnership with ReadyTV to provide a 24-hour cable channel and satellite Internet to 238 schools in 100 communities to reach a chunk of the estimated more than 31,000 students who were off from online classes due to a lack of access to the Internet. Last Thursday, ReadyTV CEO Chris Dehring said that so far, four schools have benefited and it will take at least another 20 days to be completed.

“We will be doing one with the ministry in the next couple of days. The equipment just arrived, so we’ll start this weekend, probably. We are just getting all the paperwork straight with the ministry, confirming the schools and so forth,” he told The Sunday Gleaner.