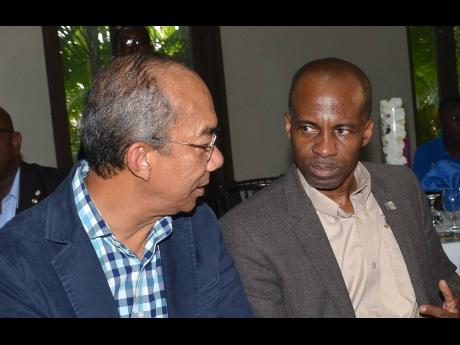 File
Minister of National Security Dr Horace Chang (left) in discussion with Lloyd Distant, president of the Jamaica Chamber of Commerce, at an even last year.

Amid the throes of the coronavirus pandemic, more than 700 people have been murdered across Jamaica since the dreaded respiratory ailment reached local soil.

The staggering death toll comes despite a range of stringent COVID-19 containment measures that have restricted the movement of citizens.

Ten of the 19 police divisions nationwide were also blanketed by states of emergency (SOEs) for varying periods this year.

A total of 268 murders were recorded between January 1 and March 10 this year, when Jamaica confirmed its first case of the virus.

Since then, there have been 709 reported killings, pushing the year-to-date total to 977 up to last weekend, according to statistics obtained by The Sunday Gleaner.

Nationally, murders are down 1.7 per cent when compared with the corresponding period last year, but this was of little comfort to some business leaders.

“This wouldn’t be surprising under normal circumstances, but it’s disappointing, given the fact that there are a number of measures I know the Government has attempted to put in place,” said Lloyd Distant Jr, president of the Jamaica Chamber of Commerce.

“I know the commissioner of police and the JCF (Jamaica Constabulary Force) continue to work arduously at stemming the ongoing increase in crime. We know that those things are happening, so it’s just disappointing to hear that those things have not resulted in the reduction that we seek,” he added.

Days after the first positive COVID case was confirmed, the entire island was declared a disaster area by Prime Minister Andrew Holness, paving the way for a range of measures aimed at curtailing the spread.

Among the measures were all-island curfews, which require citizens to remain indoors, and a lockdown of the entire parish of St Catherine as well as several communities in the capital city, St Mary and Clarendon.

But according to the statistics, St Catherine, which was also blanketed by a SOE up to August 17, leads all parishes with 123 killings across its two police divisions since March 10.

Beau Rigabie, commanding officer for the St Catherine North Police, could not confirm The Sunday Gleaner’s figure, but said gangsters fighting for “dominance” of lucrative turf in the Old Capital were contributing to the killings.

Other causative factors, he said, were domestic disputes and street-level crimes committed by armed thugs.

Rigabie disclosed that a number of gangsters are now in police custody, but acknowledged that the decades-old problem of access to cell phone in jails continues to present a challenge for the police.

“It’s no secret that St Catherine North has two of the most violent gangs. There are still persons out there hell-bent on creating mayhem through their gang activities,” he said, making reference to the Clansman and One Order gangs.

Over the near eight-month period since the first confirmed case of COVID-19, there were also 75 murders in the St Andrew South Police Division, 71 in St James, 58 in Kingston West, and 45 each in Clarendon and the Kingston East.

William Shagoury, custos of Clarendon, acknowledged that murders are down 30 per cent across the parish, but believes the 45 killings amid the outbreak of the respiratory ailment are “not really surprising”.

“People are out of jobs and so they are going into people’s homes and robbing them and shooting them. Is like the whole mentality of the [young] people is that they don’t want to work and they don’t want to learn any trade,” he said.

Anthony Clayton, alcan professor of Caribbean Sustainable Development at The University of the West Indies, believes it is a telltale sign of the displacement effect caused by COVID-19.

“Partly because of COVID and curfew, we know that some criminal enterprises have been disrupted. When gangs experience a loss of income, they just step up their efforts somewhere else,” he reasoned.

“If you clamp down on one form of criminal activity – and obviously, in this case, it was the virus that was doing the clamping down – the bad guys don’t reform and become good guys. They just look for other ways to maintain their income.”

The respected academic also pointed to what he described as a flawed zone of special operation (ZOSO) legislation.

The anti-crime and social-intervention law was enacted by the Holness administration to help normalise violence-torn communities through a clear, hold and build approach.

Insisting that the main component of such an approach is the build phase, Clayton said this cannot be achieved in 90 days, and pointed to other countries that regard it as a 25-year operation.

“We have never had that kind of long-term perspective. So what I think may be happening is that some of the long-term gains that we made from the ZOSOs are starting to wear off,” he told The Sunday Gleaner.

“What I fear has happened is exactly as we saw happen with Tivoli [Gardens], which is that you get a benefit for maybe two years and then the benefit wears off, and the criminal structure reasserts themselves and we go back to where we were.

“I’m afraid this was predictable and this is a pattern what we have seen before, and I’m afraid we appear to have replicated the same mistake,” said Clayton.

In August, the leaders of the two main political parties, along with a wide cross-section of stakeholder groups, signed off on a national consensus on crime.

The ambitious social partnership agreement seeks to kick-start a sustained reduction in violent crimes in Jamaica through a number of legislative and other actions. Among them is a “relentless” war on corruption and money laundering, the dismantling of criminal gangs and reforming the police force and justice system.

Distant, who chairs the Consensus Monitoring and Oversight Committee (C-MOC), acknowledged that some of the deliverables listed in the agreement are “not groundbreaking”, but insisted this should not be a deterrent.

“The fact is that a lot of what we need to do we have known for many years,” he said.

Clayton said he was confident that the plans “makes a lot of sense”, but appeared sceptical about its implementation.

“As to whether it will be implemented, all I can say is that remains to be seen. The Government’s commitment has to be unwavering,” he said.

Distant acknowledged, during a Sunday Gleaner interview, that the results of the agreement could be a “generational reality”, but believes it is a much better approach than the myriad of short-term measures employed in the past.

“For 40 years, we have been looking for short-term solutions. If we had started 40 years ago to say, ‘Let us put things in place that will get us where we want to be’, then absolutely, I believe we would be in a different place,” he said.

Distant vowed that C-MOC will be an independent and transparent body that will hold the Government to account for deliverables outlined in the agreement.