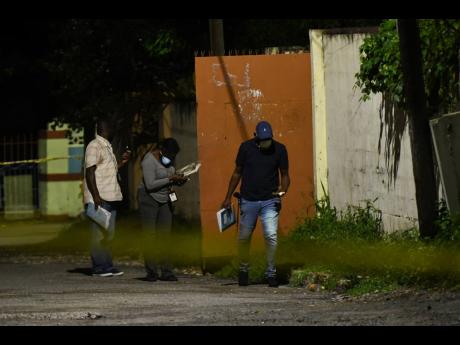 Ricardo Makyn
Police from the Major Investigation Division last evening at the scene on Plum Lane off Whitehall Avenue where two bodies were found beheaded.

Two bullet-riddled bodies with heads severed, which were found at Plum Lane off Whitehall Avenue in St Andrew, have triggered an intense probe by senior investigators of the Major Investigation Division who are working diligently to piece together whatever evidence or clues they can find to nab the perpetrators of the heinous murders which left the community in shock.

Up to press time, the bodies remained unidentified as it is believed that the killers escaped with the heads.

The police were reportedly called to the scene about 5:30 p.m.

Fletcher, who was assigned to the division earlier this year, said as soon as more information becomes available he will provide an update.

Up to September 19, there were 49 killings in the St Andrew North Division where yesterday’s double decapitation occurred. Forty-five homicides were recorded for the corresponding period last year.

On Thursday, National Security Minister Dr Horace Chang said that the heads of the security forces had signalled to the Government the need for the declaration of a state of public emergency (SOE) to quell the spike in murders in the last few weeks.

However, government action, seemingly, has been hamstrung by last month’s landmark ruling by the Supreme Court that the detention of five men under the SOEs was unconstitutional.

“We do need the additional tool,” Chang said, adding that the SOEs immediately give to the security team almost twice the strength of the force.

Commissioner of Police Major General Antony Anderson reported a 1.9 per cent decline in murders up to this week when compared with the similar period in 2019. There was also a 1.7 per cent drop in shootings.

Indicating that the force was not satisfied with the marginal declines in murders and shootings, Anderson told a digital press conference that the SOE suppressed these incidents quickly in the areas where it was imposed.

“So it is important that we get it. We can see every time since we’ve implemented it and it has been removed, we start to see the spike again,” Anderson said.

However, in the absence of the SOEs at this time, Anderson said that the police would not roll over and play dead.

He reported that with the states of emergency in place a few weeks ago, the country’s murder rate was down 5.2 per cent when compared with the similar period for 2019.

“We have pretty much lost about four per cent over the last five weeks, which is of great concern to us and the public,” Anderson had said.