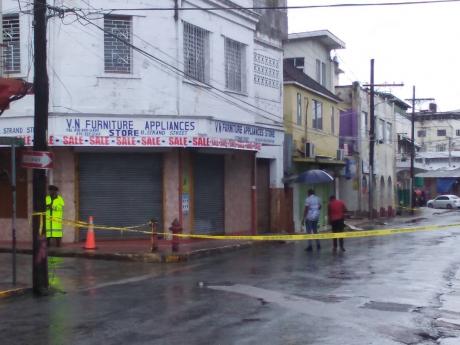 Photo by Hopeton Bucknor
Police investigators at a crime scene along Strand Street in downtown Montego Bay, where Melaki Walters was chased and shot dead by gunmen yesterday.

Residents and business operators in Montego Bay are raising concerns over the ongoing bloodletting in and around the Second City as gunmen continue their murderous rampage.

At least four persons were killed on the Heroes Weekend and leading into yesterday afternoon.

The latest victim, Melaki ‘BoBo’ Walters, of a Hendon, Norwood, address, was shot dead by armed men, who alighted from a motor vehicle and chased him through the city’s streets shortly after 12:30 p.m. before shooting him on Strand Street.

Despite celebrating that the parish had seen a reduction in murders in September, with 85 homicides recoded since January, coming down from 105 last year, the police were called to five murder scenes over the past four days.

The string of murders began with a young man being shot from his motorcycle in the community of Hurlock.

This was followed by two separate incidents on Saturday, claiming the lives of 44-year-old Aldin Cameron, a vendor of Flankers who was gunned down along Hart Street, and 25-year-old Jaheem Grant, who was also cut down in Montego Bay.

“MoBay people dem not even fraid fi COVID again. A gunman wi affi a look out fah yah now,” Brenda, a vendor in the Second City, told The Gleaner. “Everybody ‘fraid fi walk inna MoBay because a pure man a shoot after man downtown.”

She related how she had to make a dash for her life after gunmen killed 21-year-old Ackeem ‘Chino’ Barrett over a week ago, wounding two female sex workers in the process.

Several business persons in the Strand Street and Church Lane areas of downtown Montego Bay said they were also operating in fear due to the recent upsurge of murders in the downtown area of Montego Bay.

At least 92 persons have been murdered within the parish of St James, since the start of the year.