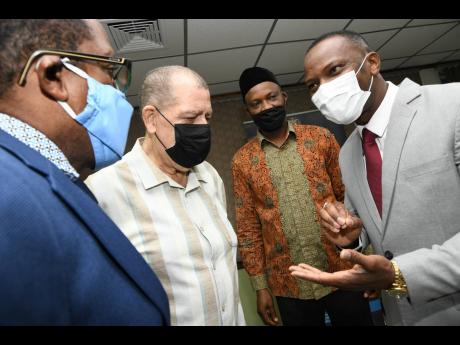 Rudolph Brown
Robert White (right), director of Sanmerna Paper Products, in discussion with from left Dr. Norman Dunn, state minister for industry, investment and commerce; Audley Shaw, minister of Industry, Investment and Commerce and Emmanuel Oguntuyi, council of Nigerian to Jamaica. White was discussing with Shaw plans by the company to expand into Nigeria. The meeting took place yesterday at the Ministry of Industry Investment and Commerce on St Lucia Avenue in Kingston.

Local companies with plans to expand their physical plants say that they have become increasingly impatient with the time it is taking to establish the Special Economic Zone (SEZ) at Caymanas in St Catherine.

Sanmerna Paper Product, which is seriously eyeing local and foreign expansion as part of its five-year strategic growth plan, has urged Minister of Industry, Investment and Commerce, Audley Shaw, to expedite the process.

The company is now awaiting approval from the Nigerian government to set up a factory in that country, pending a site visit in Lagos and Abuja, in the first quarter of 2021.

Robert White, the company’s managing director, said that the acquisition of land is now paramount to its long-term fortunes.

“Yes, we are planning to expand into Nigeria, but also, we have plans for local expansion, and so the partnership with the various relevant ministries – Ministry of Foreign Affairs, the Ministry of Industry, Investment and Commerce – is vital so that we can expand the way we need to,” White said.

He said planned local expansion, in particular, is vital to doubling output and employment.

Sanmerna has outgrown its current location at 2A Ashenheim Road in Kingston, making the need for larger space even more urgent.

“We would need at least five acres of land space for a new facility capable of absorbing plans to expand production into new areas beyond tissue paper to include wet wipes and baby and adult diapers, but help is needed in this regard,” White noted.

He was speaking at a meeting with Shaw and Foreign Affairs and Foreign Trade Affairs Minister Kamina Johnson Smith on the expansion into Nigeria and the company’s overall performance over the last calendar year.

The 17-year-old company has more than 120 employees on its payroll, and White said the plan is to double that number as soon as construction of a new factory on local soil has been completed.

In his response, Shaw noted that several other companies had also complained about the slow SEZ buildout, pointing out that “they can’t wait on the evolution of the SEZ, so they have come to the Government for land, and we are allocating land to them”.

“I am saying [to Mr White], if you want land now, it doesn’t have to wait for a special zone. We can get land for you,” Shaw said.

“We have thousands of acres of idle Sugar Company Holdings land, which we have to put some of it into production, into agro-business and other forms of manufacturing – some light manufacturing also.”

He said that a major part of getting the country back to a significant rate of economic growth in the region of six, seven, or even eight per cent is to enable production through policy and availability of factory space.

“We must help local companies find third-market countries as Sanmenra is now doing in Nigeria, and if they need land to develop, we have to provide the land because we are not short of land,” the minister said.