Pull up your socks on SBA integrity, warns Williams 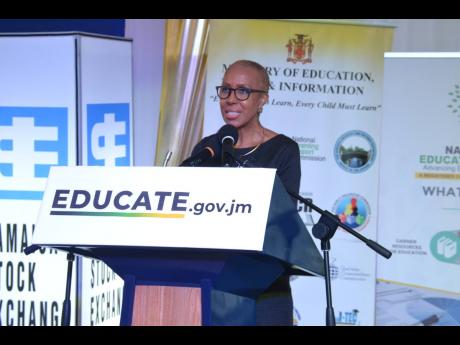 ERROL CROSBY/PHOTOGRAPHER
Education Minister Fayval Williams addresses the launch of the public-private-sector initiative ‘One Laptop or Tablet Per Child’ launch at the Jamaica Stock Exchange in downtown Kingston on Thursday.

Jamaican teachers and students have been warned by Education Minister Fayval Williams to safeguard the integrity of School-Based Assessments (SBAs) in the wake of criticism from the regional examination body that grading discrepancies gave a false picture of performance.

The upshot was a picture of systemic overmarking as a compassionate bye to students, or worse: rabid cheating.

There was an avalanche of complaints from students and teachers across the region about below-par outcomes after the Caribbean Examinations Council’s (CXC) policy shift to modify the assessment process to minimise disruption in the education system amid the COVID-19 pandemic. That decision will continue in the future.

Final grades were awarded based on the moderated SBAs and a common multiple-choice paper.

In a pointed statement during an interview with The Gleaner on Thursday, Williams said that she did not expect a repeat of the concerns in the 2021 sitting.

“We want students to take their tests and be as authentic as they can with the sources that they use, carefully document, and we want all our teacher who are involved in the process to have the highest level of integrity,” the education minister said.

“Going forward, students know that CXC will be moderating every single SBA, not just a sample, so I’m expecting that we’re gonna see a pulling up of the socks of any kinds of loopholes there were or any slack in the system.”

Williams added that if training is recommended by CXC or the Overseas Examinations Commission, Jamaican teachers and students would be readily engaged.

In the 46-page report dated October 16, the chief examiners attributed the higher marks that teachers tended to award for the SBA to a number of factors. Among them were the lack of thoroughness and vigilance by teachers while marking SBAs. This led to the award of full marks in some instances, for areas that students did not even attempt, as well as “... the misguided belief that the CXC moderators would be inclined to reduce teachers’ marks and that some element of mark inflation would protect their students from falling below their expected grade”.

Principal of Cumberland High School in St Catherine, Darien Henry, said the findings of the CXC independent review were “quite troubling, to say the least”.

“The comments obviously provide very useful discussion points on how we can vastly improve the quality assurance mechanisms to safeguard the integrity of CSEC and CAPE, which has global tentacles where students aspire for academic and scholastic development,” he told The Gleaner on Thursday.

While declaring that Jamaican schools have robust systems to safeguard the process, Henry said that there was room for serious improvement to ensure that grading and assessment can stand up to international scrutiny.

The CXC’s post-mortem serves as a call to action for headmasters to exercise vigilance in their supervision of teachers to protect school and national credibility, said Alfred Thomas, principal of Brown’s Town High School.

However, president of the Jamaica Teachers’ Association, Jasford Gabriel, said the CXC’s comments were unfortunate.

Gabriel said: “I cannot fully accept that that’s the main basis on which adjustments would have been made ... . It’s the same system teachers used for this period.”